Sports
Liv Korngable hits a buzzer beater 3-pointer as time expired in the first half. Peyton Beyers | The Volante

Taylor Frederick and Monica Arens led the first quarter charge for the Coyotes, scoring 12 of the team’s 16 points. The second quarter started off with a Coyote run to build a seven-point lead. After a NDSU timeout, the Bison chipped away at the lead, cutting it to one with three minutes to go.

“We didn’t come out as strong as we would have liked but they came in here and they were shooting really well from behind the arc,” Frederick said. “We could have came out stronger but every team we face in the Summit League is going to come out and want to play their best against us.”

Liv Korngable drained a corner three as time expired in the half. The energy from that shot carried over to the second half, where Sjerven started to take over. She scored 10 points, more than the entire NDSU team for the quarter. USD opened the half on a 17-3 run, and outscored the Bison 25-9 for the third quarter.

“We try to attack the rim to the best of our ability and tonight I thought our young ladies were able to move the ball and space the floor,” USD head coach Dawn Plitzuweit said. “Taylor Frederick started us off really well, being able to score around the rim. Hannah did a really nice job when she was in as well. We continue to try to attack and it was something that was really effective for us.”

North Dakota State chipped back in the fourth, but it wouldn’t be enough. Sjerven finished with 24 points and five rebounds. Frederick contributed 15 points and Duffy 11.

The Coyotes improved to 25-4 on the season and 13-2 in conference play. The Coyotes will have the second seed in the Summit League tournament, but they still have one game to play. Saturday at 1 pm, USD hosts North Dakota in the season finale. The last time the two met, USD brought home a 80-50 victory. 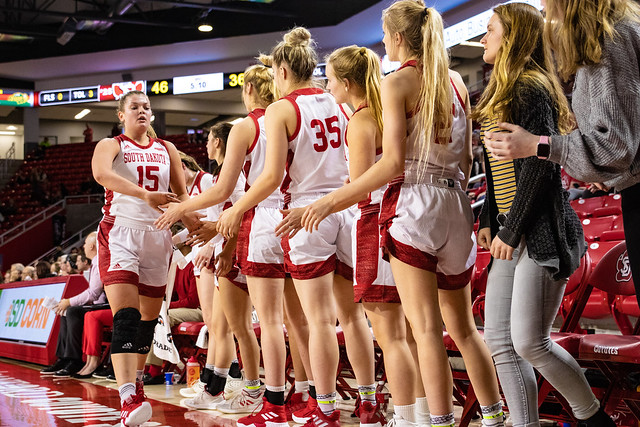