Around Town
Over 80 people were at The Bean Friday night for Vermillion's first latte art competition. Molly Schiermeyer | The Volante

Over 80 people crowded The Bean for Vermillion’s first latte art competition on Friday.

Christobal Francisquez, a barista at The Bean and organizer of ‘Latte Love,’ said the competition was a “big deal” for the community.

“Since The Bean just opened up in this new building, we kind of wanted to celebrate the grand opening and also kind of just bring the coffee community together,” Francisquez said. “This is kind of like a big city event, they’re very common in like the West Coast, East Coast, Minneapolis, Kansas, Chicago area. As far as the Midwest goes, the tri-state area, it’s very, very new within the past maybe three years.”

Francisquez said their prizes ranged in a variety of things from a coffee scale, a coffee brewer, milk pitchers, shirts and coffee.

Madalyn Houlden, a student from the University of Nebraska-Kearney, also competed Friday night. She said she likes latte art because it’s unique to each person.

“You can’t really recreate anyone’s certain style and that’s my favorite thing,” Houlden said. “You can imitate it, but no one can ever make it the same.”

Houlden said she was looking forward to meeting new people at the event.

“Competing is all fun, and I’m a competitive person, but I love meeting new people,” Houlden said. “Networking, seeing where they’re from, what got them into coffee, because honestly we’re all here for coffee and that’s my favorite thing about it.”

The night was for more than just appreciating latte art and coffee, though. All of the entry fees of the competitors went to United Way of Vermillion to help build a community connection center.

United Way Executive Director Kelsey Collier-Wise told attendees at the event that the new center would host the United Way offices, the Vermillion Food Pantry, the Welcome Table and the Salvation Army. The purpose of the center is to combine all of Vermillion’s services under one roof to help fight the poverty rate in the city.

There was also a donation box for the cause set up during the event and a booth where attendees could get more information. All baristas had to pay $5 in order to compete, but the event was free to the public to watch.

Madi Miller, a junior chemistry and secondary education major, said the event was good for Vermillion.

“I like hearing the purpose behind it that they’re trying to raise money and raise awareness about the poverty level in Vermillion,” Miller said. 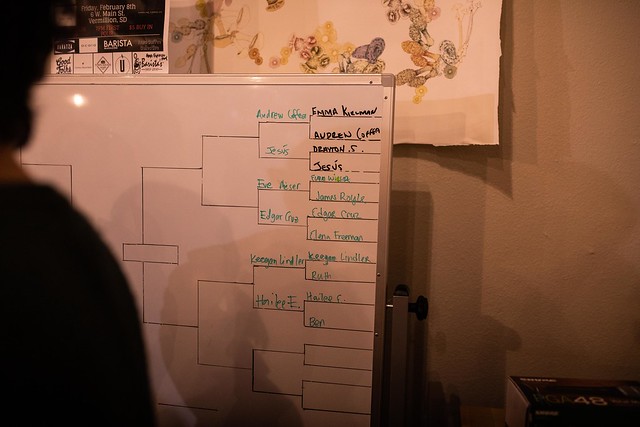