Men's Basketball
Junior Trey Burch-Manning glances at the referee who had just tacked him with a foul. Molly Schiermeyer | The Volante

“One thing that’s been consistent all year long is that we have trouble guarding a post player,” Lee said after the game. “It’s a little bit unfair to have Trey Burch-Manning down there guarding a 6-foot-8, 230-pound guy.”

Something else that has been consistent for the Coyotes is defense (they lead the Summit League with 71.1 points allowed per game). But, following a 107-102 double-overtime loss to Omaha Thursday, Saturday brought another lapse.

“This is a very good offensive league. It’s the best 3-point shooting league in the country by far,” Lee said. “There are a lot of guys that can shoot the ball, and it seems like every team has a post player. What you end up doing is spending a lot of time guarding the post in different ways and it hurts the rest of your defense.”

“We couldn’t guard,” junior Triston Simpson said. “They have some big boys down there and they crashed the boards hard.”

The Coyotes have now lost four games in a row, three of those in front of home crowds.

“I feel bad for our fans. We’ve dropped a couple our last few games at home,” Simpson said. “They deserve to see us come out there and compete and win. It’s frustrating. It really is.”

ORU shot 55 percent during the first half, nearly 14 percent better than USD. However, every time ORU seemed to pull away, Simpson or Kelley hit a three to keep the game intact. USD shot 7-of-12 from 3-point range in the first half. It wasn’t enough for the lead, but the Coyotes went to the locker room trailing by five, 39-44.

USD’s hot hand from three didn’t last in the second half, hitting only two threes in six attempts. There were two stretches where the Coyotes went scoreless for two-and-half minutes. In that time, ORU added 12 points, providing some padding until the final buzzer.

The Coyotes are now 9-15 overall and 3-8 in conference play, tied with Western Illinois at 5th place in Summit League standings. They have a week to prepare for the Leathernecks, who they’ll meet in Macomb, Ill. Saturday, Feb. 16 at 2 p.m.

“We’ve lost a few in a row now, but you can’t dwell in the past,” Simpson said. “There’s not a whole lot you can do besides show up and get better.” 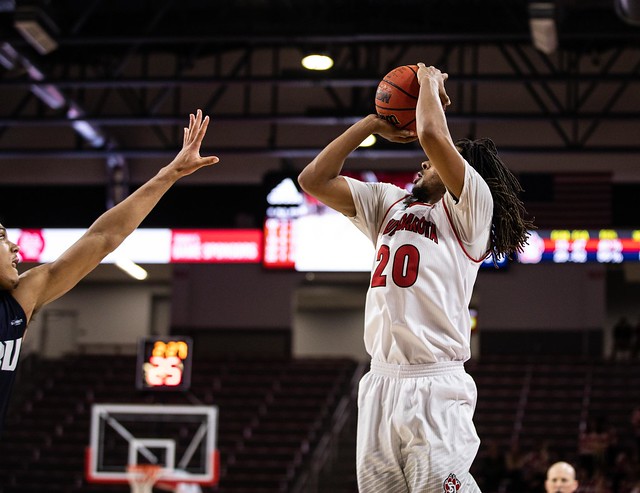 Summer Issue: On both sides of the net: Williamson on coaching, caretaking