South Dakota’s women’s basketball team falls to South Dakota State in the Summit League Championship game 83-71. The Jackrabbits earn an automatic bid to the NCAA tournament, and the Coyotes will have to wait for next Monday, March 18, when the selection committee announces the field of 64 teams and where the opening round games will be played.

Less than four minutes into the game, Ciara Duffy hits a lay-up and injures her left ankle. She would leave remember ‘would’– would leave -> left the court momentarily before joining her teammates on the bench. The first quarter was a story of rebounding. While the Coyotes shot 35 percent (7-of-20), they grabbed 14 rebounds (seven offensive) compared to six total for the Jackrabbits. Make past tense ^^

USD held a 17-15 lead after one quarter. The Coyotes built a 10- point lead in the second quarter, but the momentum flipped in a hurry. Over a roughly three minute span, SDSU went on a 22-2 run, giving them an 11-point lead with two minutes left. Redshirt-freshman Hannah Sjerven hit a pair of buckets to cut the lead to seven at the half, 45-38.

Duffy returned for a few minutes in the second and third quarters, but her ankle was continuing to bother her. SDSU’s lead was 19 at the end of the third quarter. The Coyotes went on a run to cut the lead to eight points with 1:15 to go. They couldn’t get any closer than that.

“I think this team played with a lot of toughness and intensity. It certainly wasn’t for a lack of effort,” Head Coach Dawn Plitzuweit said. “We had 19 offensive rebounds, we turned the ball over 10 times which was more than we wanted to, but we just didn’t make any shots.”

Miller, Guebert, Arens, Sjerven and Tagyn Larson were named to the all-tournament team, Miller winning the Most Valauable Player award. With the Jacks locking up their spot in the tournament, all that awaits them is who and where they play. On the other side, USD now hopes their 28-6 record and pair of high-quality wins (vs. Iowa State, at Missouri) will be enough to get them into the NCAA tournament.

“The positive thing is that we do believe that this group of young ladies will have a chance to play again in the NCAA tournament,” Plitzuweit said. “Which is one of their goals and its something that I am really happy for them. I love these kids and I feel bad for Allison (Arens) because I think this was a special opportunity and we didn’t get it this way but I do believe we are going to have an opportunity to do it another way.”

The case for the Coyotes is a solid one with two wins over top 25 opponents and no horrible losses. Other quality wins include Green Bay and South Dakota State in the first meeting. The loss at Denver hurts their resume, but they’ve built themselves into a likely tournament team. 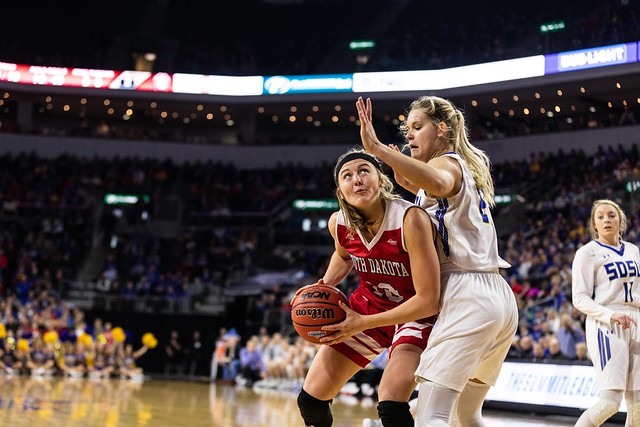 Is Joe Biden trying to lock us down again?

Duo to be required by all BOR schools