In two regular-season meetings between the Fighting Hawks and Coyotes, there were 120 fouls and over 100 free throws attempted; this game was no different. There were 53 fouls and 48 free throws in the game.

“We knew this was going to be a really physical game,”  Junior Ciara Duffy said. “They’ve got a lot of really good athletes, a lot of physical players. We did kind of physically and mentally prepare for that coming into the game.”

The Coyotes controlled the first quarter, but North Dakota’s full-court press forced 10 first-half USD turnovers and kept UND in contention. They also dominated the third quarter like they did the first, extending the lead to 22 by the end of the quarter.

“South Dakota State has a lot of really good athletes, a lot of skilled players,” Duffy said, “Really physical play, especially down low. I think, yeah, this was a good prep game for that.”

The first two meetings between these two this year did not disappoint–the Coyotes winning the first go-round 105-98 and SDSU snatching the second meeting 82-78. Both games went to overtime, the first going into double OT.

Both teams are anticipated to make to NCAA Tournament, but seeding will be affected by the outcome of the game. The game is scheduled to tip-off at 1 p.m. Tuesday afternoon inside the Denny Sanford PREMIER Center.

“I think it is certainly going to be an atmosphere that is second to none,” Plitzuweit said. “After having an opportunity to coach in the BIG10 and at the BIG10 tournament, I can tell you certainly from an athlete’s experience is very very different, because of the fan base that is here and the atmosphere. That’s something very unique.” 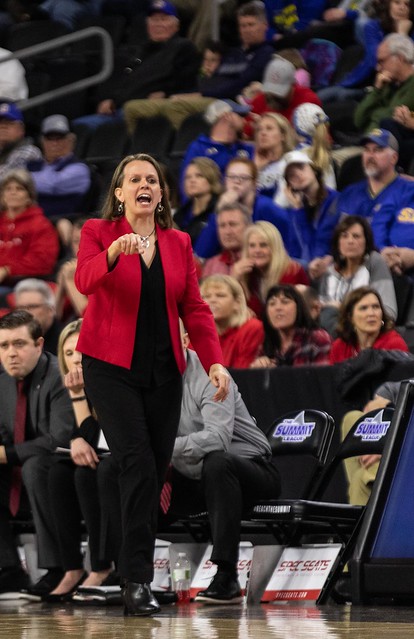