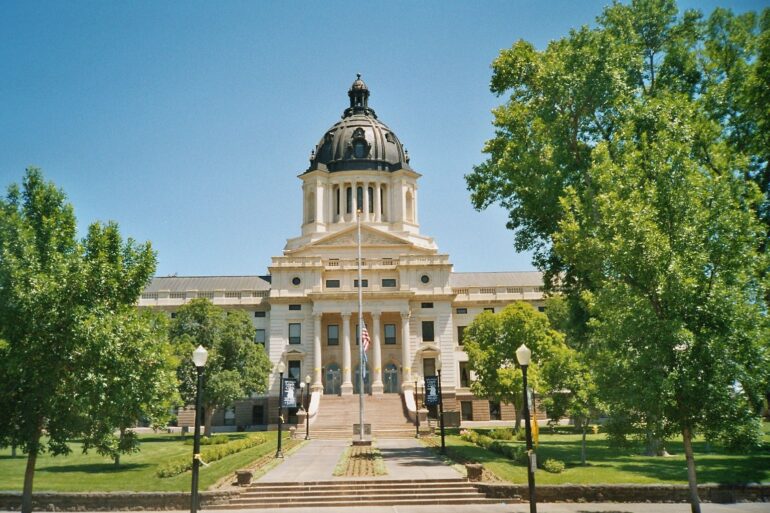 Campus
The South Dakota State Senate passed a bill in January that opponents say could allow high school science teachers more leeway in how they teach science to students. File photo / The Volante

A bill that allows school teachers to teach the “strengths and weaknesses” of scientific theories in classrooms, titled “An Act to protect the teaching of certain scientific information,” passed in the South Dakota Senate last month.

The bill, which hasn’t yet been enacted into law, has sparked controversy as a possible defense of teaching creationism in public schools. Various entities, including the state ACLU, as well as various editorials, have been outspoken about their opposition to the bill.

In full, the bill consists of only one sentence: “No teacher may be prohibited from helping students understand, analyze, critique, or review in an objective scientific manner the strengths and weaknesses of scientific information presented in courses being taught which are aligned with the content standards established pursuant to § 13-3-48.”

Sam Shaw, an administrator within the division of learning and instruction in the South Dakota Department of Education, said it’s unclear what the bill does.

“The intent seems to be allowing any teacher to teach personal opinions regarding scientific information,” he said. “If the bill does nothing, then it’s unnecessary. If it really does something, then it infringes on the authority and responsibilities of the local school boards to supervise classrooms and direct curriculum. I think, fundamentally, this bill is attempting to fix a problem that doesn’t exist.”

Shaw said there’s no need for the bill because teachers are given leeway to teach what they want, as long as it’s backed up with evidence.

“As of now, science teachers do not need protection if they’re teaching on scientific evidence,” Shaw said.

USD biology professor Hugh Britten said the bill doesn’t really do much, and he questioned why legislators would be in favor of such a bill.

“Why do we need to waste legislators’ time and everybody else’s time?” Britten said. “The lawsuits are going to be inevitable and the state is going to have to defend them. There’s going to be money, time and effort that’s being wasted all on this one bill.”

While the bill is vaguely-worded, Britten said its real purpose is clear.

“These are weasel-worded bills that come up every once and awhile,” he said. “The strength and weaknesses language is common for creationist bills. You can’t have a law that says x, y and z, you have to fool the legislature.”

“My view for pre-college classes is to give students a background in settled science,” Britten said. “Then when they come to college we can start pushing the edges a little bit.”

“It is a bill that espouses to give teachers a choice in how they teach science, that’s the way it’s worded,” she said. “What it does is allows for creationism to be taught alongside science, or instead of science, in public schools. Creationism is a belief system, whereas science is a way of doing and seeing the world. They’re two different things and should not be equated.”

Mark Sweeney, a USD associate professor of Earth sciences, wrote an op-ed in the Argus Leader. He stated, “Previous versions of related bills and in their public statements, the sponsors have clearly indicated their targets: climate change and evolution.”

In an interview, Sweeney said what’s being taught in schools is a set of hard facts, and not off-the-cuff subjects.

“In K-12 education, I don’t think it helps them when you’re questioning theories,” Sweeney said. “They’re theories because they’ve been tried and tested, over and over again. So it’s not just someone’s opinion. There’s a load of data that back up these ideas.”

Sweeney said he’s frustrated that lawmakers are considering this type of bill when scientific literacy is lacking.

“I think most of us here that teach science at USD are really into science literacy,” he said. “So we want to do what we can to make sure undergraduate students know as much as they can about different science topics.”

“Science has no politics, it has no belief system,” Ezrailson said. “Science is what is observed and recorded, and really, the essence of what is happening. The truth.”

The goal of education is to improve, not impede, students’ education, Sweeney said. This bill would hinder the processes in which students learn science.

“We want to strengthen education, not weaken it,” he said. “We want our students coming out of grade school to have a solid foundation in understanding what scientific concepts are today, based on the evidence we have.”