The Volante has been University of South Dakota’s student newspaper since 1887. Through a special partnership between USD and the Student Media Board, The Volante is entirely independent of the university. 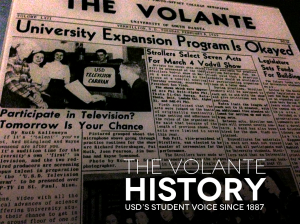 Notable alumni of The Volante include Al Neuharth, founder of USA Today.

In Fall 2012 Cristina Drey wrote an article about the history of The Volante.

While the University of South Dakota celebrates its 150th anniversary, The Volante is celebrating a milestone of its own — 125 years as USD’s student-run newspaper.

Patrick Lalley, managing editor at The Argus Leader in Sioux Falls, S.D., worked for The Volante his senior year of college at USD and said working for the newspaper opened a door for him.

“Every opportunity that I have gotten, every level that I have achieved was because of the time I spent at The Volante,” Lalley said. “It taught me that I was good at something.”

Back in Lalley’s day, The Volante had a different location and was much smaller than it is now.

“We had an office in the old union that had two rooms,” Lalley said. “You came in and there was a desk and the other room behind that was the production room which had one whole glass wall and on the other side there were pool tables, so while we were in there laying out the paper, there were guys out there playing pool and watching us, so we’d wave. It was a very strange situation but it was fun.”

Mary Jo Hotzler, editor of the Grand Forks Herald in Grand Forks, N.D., was involved with The Volante all throughout her four years of college as a reporter, sports editor and then the managing editor for her junior year and part of her senior year.

The biggest change in The Volante since Hotzler was involved is the website that had just started, she said.

“It was quite a challenge and now the big difference for the students there is that the web and mobile media is a big part of what they do and what they talk about,” Hotzler said. “Even though it is a weekly newspaper, there is more of a push to get the news out there as it happens in the world.”

One of the major skills Hotzler learned from her time at The Volante was professionalism, she said.

“When you are putting out a newspaper, it’s for so many people to see and that is a serious job,” Hotzler said. “That is something that I learned there, and I applied every day since.”

“When I was there, sometimes we paid a little too much attention to the administration,” Neuharth said. “Now, it’s strictly a students’ newspaper and does a very good job of all aspects of student activities — educational, social and sports.”

Some advice Neuharth has for current students involved with the media is to be well-rounded.

“They need to recognize that it is no longer just journalism, it’s media,” Neuharth said. “They need to make sure they aren’t just print journalists at The Volante because when they get out and get into a paying job, they are going to have to have overall media interests or experiences.”

Hotzler had similar concerns for students, saying having internships was just as vital.

Lalley emphasized the need for journalism students to keep journalism ideals and faith in themselves at all times.

“Every step along the way there are people who will exploit your self doubt,” Lalley said. “You will never be perfect and you may never convince people but you have to believe. You have to believe in a mission and have to believe what we do is vital for a free society, that we protect individual rights and that we guard against abuse and injustice.”

Upon the 125th anniversary of The Volante, Lalley expressed his congratulations on the overall progress and the students’ work.

“It’s an amazing institution, and I think that the incredible strive that the organization has made underneath the Neuharth center is really unparalleled in college journalism,” Lalley said.