Sports
Junior Ciara Duffy shoots over an NDSU defender inside the Denny Sanford Premier Center at the 2019 Summit League Tournament on Saturday. Molly Schiermeyer | The Volante

The USD women’s basketball team took a wire-to-wire victory over North Dakota State Saturday inside the Denny Sanford Premier Center. With the 74-51 win, USD advances to the semifinals of the Summit League Tournament.

The Coyotes opened the game by finding Senior Allison Arens in the corner for a quick 3-pointer, and never gave up a lead afterward. USD shot a perfect 5-of-5 from the floor, including 4-of-4 from behind the arc to start and doubled up NDSU 22-11 in first quarter.

The second quarter didn’t play any favors to the Bison.

“Certainly felt like that was a very hard fought battle,” USD head coach Dawn Plitzuweit said. “I thought we came out and we were really attacking and hitting shots early in the game. Our offense started to slow down a little bit, but our defense was very good in the second quarter.”

The Bison concocted a more competitive second half, shooting 62 percent (13-21). NDSU sophomore forward Emily Dietz exploded for 15 of her 20 points, and the Bison outscored the Coyotes 35-33 in the second half.

“Coming into the second half, I thought they did a good job,” Arens said. “They changed a couple things in their offense so it took us a little bit to adjust to it. Just getting around their post players, denying their guards and putting some pressure on the ball were the main adjustments (defensively).”

For the Coyotes, Sjerven continued to have her way inside, finishing with 20 points and five rebounds. Arens ended the game 7-of-8 from the field for 18 points, and added six boards. Ciara Duffy pitched in 11 points and Chloe Lamb 10. Monica and Allison Arens totaled six steals between the two of them; NDSU as a team had six steals for the game.

“The University of South Dakota not only very physical but they share the ball very well, and if you focus on one player or one aspect of the game, for instance, the three, they throw the ball inside,” NDSU head coach Maren Walseth said. “They are also very good and very aggressive at their straight line drives, so for our perspective, a strategy perspective, they can score at all three levels at a very high rate. Which makes them very dangerous to play against.”

The Coyotes were able to put up 20 more shots than the Bison, making 10 more buckets as well.

USD now looks ahead to Monday, where they will play the winner of Denver and North Dakota at 2:30 p.m. Denver and UND play Sunday at 2:30.

On the other side of the bracket, Macy Miller scored 24 points to lead South Dakota State past Purdue-Fort Wayne 88-50. SDSU awaits the winner of Oral Roberts and Western Illinois in the semifinal. 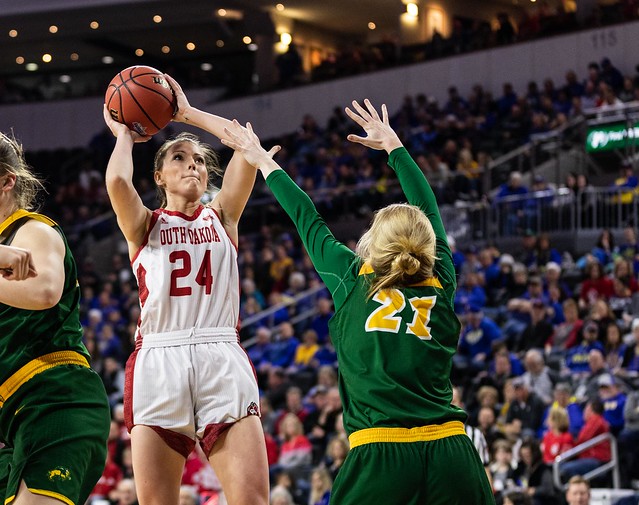