The Coyotes clawed back from a 17-point third-quarter deficit to take down Drake in a 102-94 overtime thriller in the Sanford Coyote Sports Center Wednesday night.

Down by two with two seconds to go in regulation, junior guard Monica Arens intercepted a Drake pass for one final Coyote possession. After a timeout, junior guard Chloe Lamb inbounded the ball to Arens, who drove to her right and banked in a buzzer-beating layup to send the game into extra time.

“The play was drawn up to get it into anybody to make a play,” Arens said. “They doubled (Ciara Duffy) a bit and (Lamb) got the ball into me and I guess we just needed a shot so I kind of just drove and threw it up.”

The play was one USD, ranked first of all mid-major teams, had run multiple times, but head coach Dawn Plitzuweit said Drake made this particular attempt difficult.

USD, who had trailed since the 7:37 mark in the first quarter, took the lead on a Lamb 3-pointer 16 seconds into overtime and never trailed again, en route to their third consecutive win.

“I thought our players showed a great, great deal of resilience. We were down 17 in the third quarter, and then found a way, possession by possession, to dig ourselves out of that hole and start attacking again,” Plitzuweit said.

Lamb led the team with her career-high 23 points, 18 of which came from behind the arc. Senior guard Ciara Duffy followed with 20 points and seven rebounds, while junior center Hannah Sjerven put up 16 points and three blocks in just 22 minutes of action.

However, Plitzuweit called upon senior guard Madison McKeever late in the game to help spark the comeback. She hit three 3-pointers within the final six minutes of regulation, including one with 13 seconds to go off a fast break to pull USD within one point. 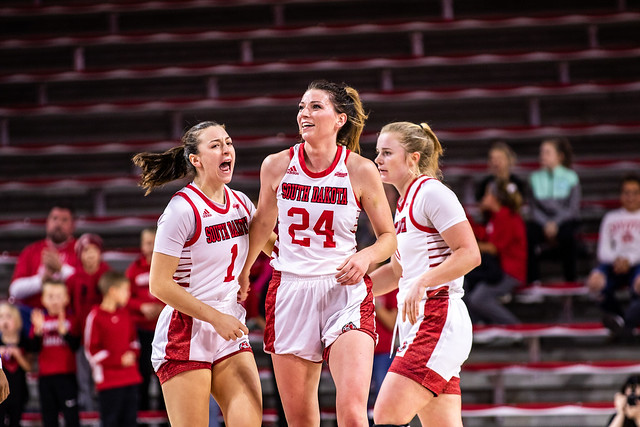 McKeever finished with 15 points while shooting 75% from beyond the arc.

Drake, ranked third in mid-major rankings coming into the game, got off to a hot start, going on a 10-0 scoring run in the first quarter and eventually securing a 17-point lead in the third. Sophomore guard Kierra Collier played her best game as a Bulldog thus far, scoring a career-high 27 points with four assists and two steals.

Drake shot over 50% from the field in the first half, including a monstrous second quarter in which they outshot USD 69% to 38% and connected on 71% of their threes.

Lamb said the team knew they needed to mix things up, primarily on the defensive end.

“I think we just figured out it was crunch time. We knew if we were going to win this game, we needed to string some stops together. Down the stretch that became a really big focus for us.”

“Our ladies really believed we needed to make a change, and they made a change defensively,” Plitzuweit said. “I thought the crew that was in there didn’t hang their heads. Their energy and their determination were outstanding.”

Winning close games is nothing new for this year’s squad as they beat Northeastern by four and Green Bay by six in their first two games. Both games also forced the Coyotes to travel a combined distance of 2,073 miles already this season.

Duffy said she believed this team could be described in one word: grit.

“I think this team just has a lot of grit, to be honest. “I think our big thing that we’ve been emphasizing is resiliency. Unfortunately, we’re putting ourselves in a position to test that.

The win marks Plitzuweit’s fifth victory over a Power 5 program in her four years with USD.

Arens led the way offensively with 17 points while again playing hero for the Coyotes. After junior forward Ola Makurat sank a three-pointer with 12 seconds remaining to give the Utes a 71-69 lead, Arens drew a foul and buried her free throws to tie things up at 71. On Utah’s final possession of regulation, Arens blocked a three-point attempt from Makurat to send the game to overtime.

The Coyotes took the lead early in the overtime period and only surrendered it once on their way to the victory.

USD dominated inside, outscoring Utah in the paint by a 42-24 margin. The Coyotes also secured 19 points off of turnovers. As a team, the Coyotes shot 45.7% from the field.

Duffy recorded 16 points, seven assists and five rebounds in the contest, securing a second-consecutive Summit League Player of the Week honor in the process.

The Coyotes return home to take on another Power 5 opponent in Missouri inside the Sanford Coyote Sports Center at 7 p.m. on Thursday.

Is Joe Biden trying to lock us down again?

Duo to be required by all BOR schools