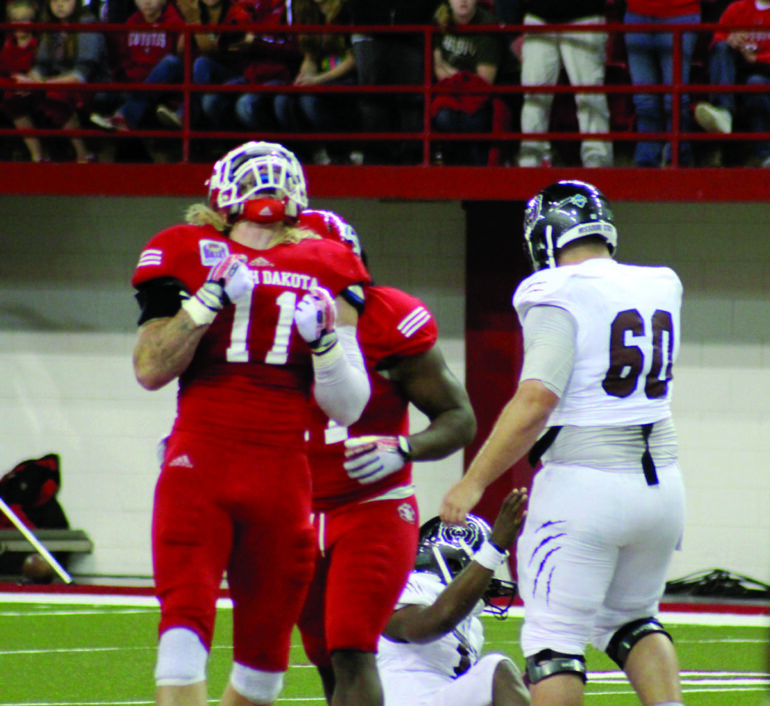 This summer, the University of South Dakota’s recent graduate Tyler Starr had his time to show the world his true self, both on and off the football field.

HBO’s reality series “Hard Knocks” featured the Falcons’ training camp and fall preseason preview, featuring Starr in the first episode. Starr, his wife, Megan Wheeler, and son, Hunter, were all featured in the episode within the first 10 minutes.

“Got to keep the motivation close,” Starr said in the episode, looking at a picture book of his family.

Reality TV and other media outlets have all profiled the Coyote linebacker since his graduation last spring after being drafted by the Atlanta Falcons in round seven of the NFL draft May 10.

“Only two guys that I have coached had the same effort,” he said. “He brought it every rep, every play, every practice, every game and every workout.”

However, Starr is not a shoe-in to make the Falcons’ final roster. Starr survived the 75-man roster cut Tuesday. The final cuts to make the 53-man final roster will take place Saturday after the Falcons play the Jacksonville Jaguars in their last preseason game Thursday.

BleacherReport.com’s Scott Carasik wrote Starr has the best combination of size, speed, power and motor of all the pass rushing edge players on the Falcons’ roster.

“Tyler Starr will be the most impactful defensive player from the Falcons’ 2014 draft class,” he said. “He has a motor that never stops.”

“The outside linebacker and seventh round pick from South Dakota played with high energy throughout the three sessions,” McClure said.

Starr did not always have that effort and high energy, Glenn said. He said it was Starr’s junior year where he made the change. Glenn also said Starr eventually began upping his offense game in practice.

“He drove people crazy trying to block him,” Glenn said.