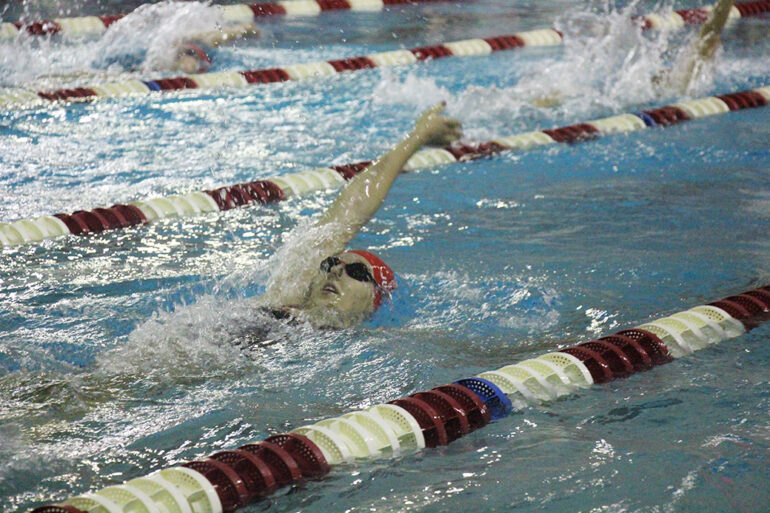 As the swim season gets into full swing, both the men’s and women’s teams are putting in the work to improve as they adjust to a big transition in their schedule.

This weekend the University of South Dakota swimming and diving teams head to Stevens Point, Wis. for the Border Battle Meet.

“This is a very busy time of the year,” said head coach Jason Mahowald. “Each swimmer can expect to compete in at least seven events in a day and half. It’s a good thing for our younger, less experienced swimmers.”

This time of year is a turning point for the Coyotes, as practices get harder and competitions get more serious.

“On Monday I already noticed the difference,” said sophomore Jake Knowles. “Usually Mondays are a little more relaxed and just getting you back into things. For us though, Monday was probably the hardest practice of the year so far.”

With conference season and two important meets ahead, the Coyotes are looking to improve as a team and prepare themselves for success in the future.

“We are trying to win, obviously, but the most important thing for both men’s and women’s teams is to improve as the season progresses and peak at the right time,” Mahowald said.

Last weekend was a tale of two days for the men’s and women’s teams.

On Nov. 6 the women picked up their first conference victory of the season as it defeated Nebraska-Omaha 165.5-134.5 in a dual meet. The Coyotes won 10 out of 16 events, sweeping both the relay and diving events.

After their victory, rival SDSU quickly shot down any momentum. The women lost at Brookings 182-116 and the men lost 189-111.

The next meet on Nov. 7 looked promising leading into the rivalry dual, especially for the women.

Sophomore Sam Schutt led the way with three individual freestyle event victories and one win on the 400-meter free relay over Omaha.

“It was a great team effort Thursday night. Once you start winning and everyone knows it, the whole team attitude changes completely,” Shutt said.

Mahowald was pleased with his team’s effort Thursday night.

“Across the board we really swam well and looked very sharp,” Mahowald said. “This was the first meet all year that we had everyone contributing, and it was just truly a great team effort.”

The team claimed seven of 16 events at SDSU.

Even with the loss, senior Kate Dailey was pleased with her own and team results from the Nov. 7 meet against SDSU. She said good finishing times and the team staying positive were good signs.

“As a team we all swam really good times and even though the team score may say we lost, I look at as a victory,” Dailey said.

“The times each individual posted were really good. SDSU just had a really good day, but we will be ready for them when they come down here,” Schutt said. “We have a habit of kicking their butts at the Dome, and then at conference, where it really matters, we get to see them again.”

It wasn’t as positive for the men’s team against SDSU as the Coyotes only won four of the 16 events.

“We put up really good times and our medley relay actually came close to beating our conference score so that was a good sign,” Knowles said. “Everyone seemed to be cutting time from previous results which is what you want to see as the season goes on.”

Mahowald was again pleased with the men’s team’s effort and results from the Nov. 7 meet.

“We swam another great team meet,” he said. “Had they been putting up the times they had been all year we would have won this meet, but that’s swimming. It’s a tough pill to swallow for the team, but we have to keep working and improving.”

(Photo: First-year Kathleen Juffer competes in the sprint event during the Coyote home swim meet Nov. 6 in the DakotaDome. The women’s swim team picked up their first conference victory of the season during the meet. Anna Glenski / The Volante)