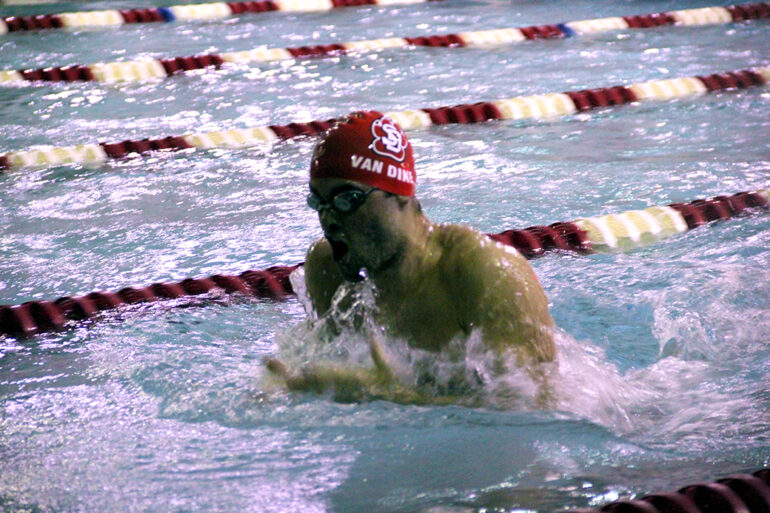 Junior Ean Kiddoo was not entirely pleased with his performance, as he placed sixth in the 200m freestyle and fifth in the 400m freestyle, but was still excited racing against in-state rivals SDSU.

“There’s always going to be the aspect of the rivalry,” Kiddoo said. “But you go out every other meet just as hard as this meet.”

For USD’s women, sophomore Sam Schutt had four first place finishes, winning the 400m medley relay, the 200m freestyle, the 100m freestyle and the 400m freestyle. Sophomore Greysen Hertting won both the 1m and 3m diving competition, breaking a six-year a school record with a score of 320.33.

Even though her team lost, junior Hannah Veselik had a positive outlook on the day’s performances.

“We are doing exceptionally well,” Veselik said. “I am so proud of all the girls right now — we’re all swimming very well.”

(Photo: Sophomore Jaden Van Dike competes in the 400m medley relay Jan. 23 during a swim meet against SDSU. Van Dike and his three teammates placed fourth in the event. Overall, the USD men lost to SDSU 182-108. Phil Millar / The Volante)