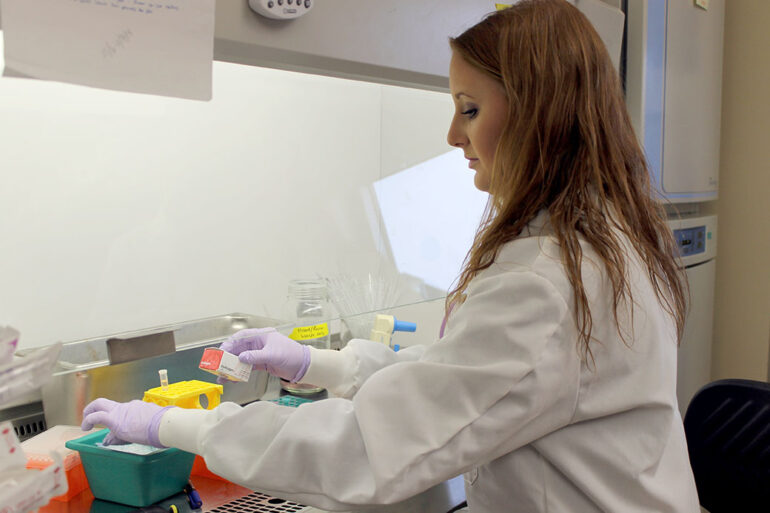 The amount of sexually transmitted diseases has risen in South Dakota, but local professors and students are trying to get a better understanding of how these diseases work.

Melissa Shefl, a physician assistant at the Vermillion Sanford Clinic, said most students who come in to get screened for STDs do not know about the rise, especially with syphilis.

“That’s the statistic that gets people listening,” Shefl said. “It’s not something you think could happen around here or happen anymore. That one has shock factor.”

She said the clinic screens for chlamydia and gonorrhea most often.

If an STD is not detected and treated, Shefl said it could lead to long-term issues.

“The number one danger is passing it on to other people,” Shefl said. “We want them to be tested and treated as soon as possible.”

Shefl recommends people get tested for STDs with every sexual partner they have.

“If the thought has crossed your mind, you should be screened,” Shefl said.

To reduce the risk of getting an STD, Shefl said she encourages students to use safe sex practices, including using condoms.

Lisa Moore, an assistant professor at the University of South Dakota School of Medicine,  jokes that while she doesn’t have chlamydia, she’s working on it.

“It’s difficult to work on, but it’s fascinating,” Moore said.

Her research focuses on how chlamydia manages to take on the lipid composition of both it and its host cells, which it takes nutrients from without harming. She hopes to find how chlamydia undergoes this process and what the composition of the lipids means, in addition to gaining a better understanding of chlamydia.

Studying the STD doesn’t come without its challenges. Chlamydia has to be cultured in eukaryotic cells and cannot be grown on plates or broth. The genetic tools used to find out what certain genes do in other bacteria haven’t been developed for chlamydia yet.

“A lot of these classical experiments you can’t do,” Moore said.

“It’s always good to have somebody else to bounce ideas off of when you’re writing grants,” Ouellette said. “As far as the students in the lab, it’s important for them to see that this is how science works. It’s collegial, it’s collaborative.”

He said the rise in STDs might not directly be an increase in the STDs themselves.

“It’s harder to know if the rates are increasing, or we have better surveillance,” Ouellette said.

With chlamydia, catching the STD early is key.

Many chylamydia-related infections do not show symptoms and are not detected until a female has her yearly physical exam. The longer the STD is in the body, the more likely it has to ascend from the cervix to the uterus, where it starts causing damage and could lead to infertility.

While she questions if a vaccine is obtainable, Moore said there’s a possibility of finding a way to limit the infection.

Currently, the treatment for chlamydia includes a therapeutic that targets all the bacteria instead of only chlamydia. Ouellette said their research could potentially lead to a treatment that would only target the STD.

But finding a better treatment isn’t the only drive behind his research.

“I find the organism fascinating and I want to know how it does these basic processes,” Ouellette said.