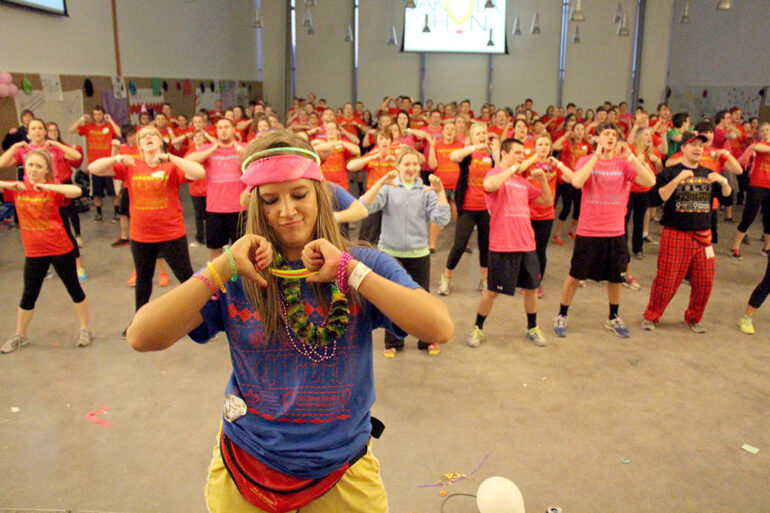 Dakotathon at the University of South Dakota won’t be an easy task in 2015. In addition to raising its fundraising goal from $56,000 to $61,000, the organization was also hit with a more personal loss.

Dakotathon is a 24-hour event in which volunteer dancers are paired with “miracle children” — children with illnesses — to raise money for the Children’s Miracle Network.

The group is dancing for 15-year-old Tanna Kingsbury, a miracle child from the last Dakotathon who passed away, and sister to a member of last year’s executive board.

Ashlin Peitzmeier, senior and overall co-chair of the event, said this year’s event will honor Kingsbury by placing 33, her favorite number, on the Dakotathon shirts.

Peitzmeier and fellow overall co-chair Steven Payne said they will remember Kingsbury in their speeches toward the end of Dakotathon and during the candle vigil ceremony in which the group remembers miracle children who have passed away.

“That will be a pretty hard time for us this year because we’ve had a miracle child pass away,” Peitzmeier said. “It will hit home.”

The vigil will be followed by fireworks to celebrate the life of the children.

“We’ll remember them in a happy way and celebrate their lives,” Peitzmeier said.

After raising its fundraising goals, Dakotathon will continue to grow as one of the largest fundraising events in the area.

It’s not a fight between the two schools to raise the most money. The event is about fundraising, not competition. But Pietzmeier said the two events stack up against one another in a variety of ways.

“They do get more dancers to sign up, but they have a bigger school than us,” Peitzmeier said. “Other than that, we have a pretty similar event due to the fact that a lot of the same families come and share their stories, and we all learn a morale dance, too.”

In its 18th year, the goals of Dakotathon have been raised $18 per position, including dancers and morale captains.

Finance Chair Taylor Vavra is the only one who knows how close Dakotathon is to reaching its goal. She said she’s optimistic they’ll achieve it, and that a higher donation goal is motivating.

“It makes our trouble seem so little that all we have to do is raise $500, and that’s not that big of a deal compared to what these kids go through,” Vavra said.

The amount of dancers the group wants to attract has also increased from last year’s goal of 250 to 350. So far, 387 people have signed up to raise money and dance.

But monetary amounts don’t matter as much to the volunteers. They’re there to make the kids happy.

“We try to show them the time of their lives away from the hospitals,” Payne said.

Volunteers wear hospital bracelets stating why they’re dancing during the 24 hours. At the end, the bracelets are cut off by miracle children and their families.

New entertainment includes a cake walk, Zumba and ‘Yotes Got Talent. The men’s basketball team will also play games with the miracle children. The miracle children will be revealed the week of Dakotathon, rather than on the day of the event, as in previous years.

“We try to think of new ideas and keep the things that work really well,” Payne said.

Volunteers will not be allowed to consume caffeine until an early morning rave. Even after Dakotathon is over, members don’t have long of a break. Interviews and planning for next year’s Dakotathon will begin the next day.

During the event, the 12 miracle children and families share their stories and what they will use the raised funds for. Payne said these stories remind the students why they’re raising funds.

Payne remembers a story of a girl who had plastic bronchitis and coughed up casts that were blocking her airway. Payne said while the girl’s mother was emotionally telling the story, her daughter happily declared she names everything she coughs up.

“The girl was as happy as a clam,” Payne said. “These kids have come face to face with something that none of us have ever had to deal with and they deal with it better than we ever would.”

(Photo: Junior Amanda Schall dances in-sync with other participants behind her during the 2014 Dakotathon. File Photo / The Volante)