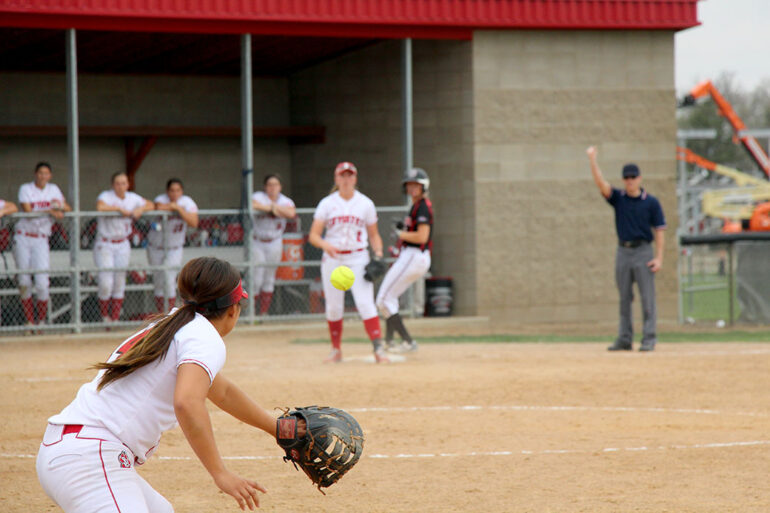 After facing adversity and getting off to a slow start at the beginning of the season, the University of South Dakota softball team is heading in the right direction — and has the stats to prove it.

In the last eight games, the Coyotes have scored 28 home runs.

But it’s not just the hitters who are stepping up, said head coach Amy Klise.

“Our pitchers have really been stepping up the last couple weeks, our hitters are hitting the ball and our defense is stepping up,” she said. “We’re putting a lot of switches of the game together.”

After a string of tough games toward the beginning of the season, the Coyotes are using that to fuel themselves forward in conference play.

“At the beginning of the season we started off pretty slow — we have a very tough schedule this season, so that’s what’s built us to get where we are now in our conference,” said senior catcher Allie Daly. “That’s number one, and then trusting in the preparation that we’ve done in practice.”

Around the time the conference season started was when the team kicked into a higher gear, said junior first baseman Yvon Minogue, who recently broke the school record for doubles hit in a single season.

“When conference first started, we knew this was our year and we really wanted to show it,” she said. “Everyone really got pumped for it, and it’s showing. Everyone is hitting so well, so it’s good, especially since we’re getting so close to conference. It’s getting more exciting because we know we can do it.”

That success is something Klise has seen coming over the course of the season.

“It’s just been a gradual sticking together,” she said. “We faced a lot of adversity and started with a really strong schedule at the beginning of the year, and being able to understand that that was to set us up for these games, we just kept going in the right direction. Nothing has changed, and there wasn’t a day that it all switched. We’ve continued to go in the right direction, and this is the result of it.”

Looking forward, Daly said the Coyotes, now 17-22-1 overall and 8-3 in conference play for second overall, are continuing to rely on each other’s energy to keep them motivated to finish out the season.

“In the dugout the biggest thing we promote is energy — everyone getting fired up about every little thing, even if it’s a walk or somebody getting hit by a pitch or someone hitting a home run,” Daly said. “That fire is going to be that conference championship. Our program has never won a conference championship, so that’s the number one thing for us. We want to see our name on the banner in the Dome.”