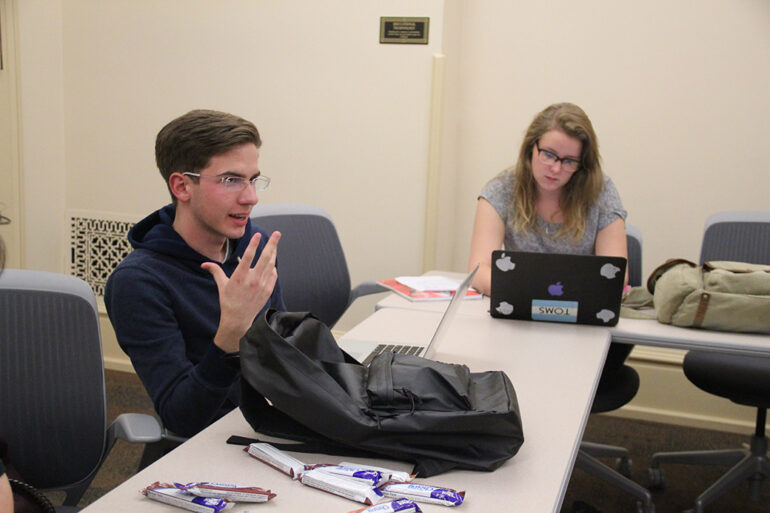 Working to find its niche in the community, the USD Honors Association is working to prepare high school students for the ACT.

HA President Joshua Arens, a junior, said he’s excited for the new ACT program to make an impact on high school students, as well as the organization’s progress as a whole.

“We’re obviously not as capable as college professors, but we all have been through the ACT and we’re Honors students,” he said. “It just seemed like a natural fit to provide this service that everyone could use.”

Arens is one of several students who had the option to take ACT prep classes in high school, but found them too pricey.

Allie Logan, a health sciences major, was one first-year who was recruited to apply for a tutor role.

Logan taught ACT prep classes her junior and senior years of high school, and through that same program, was able to take a preparatory class that would’ve otherwise cost $800 without her employee discount.

“If anybody else wanted to take a course like that, it’s very expensive,” she said.

High school students in the program will come for tutoring in Old Main four Saturdays before their chosen test date to improve their testing techniques and their score if they’ve already taken it.

About six USD Honors students were specifically chosen to tutor because they have the ACT fresh in their minds. They’ll be participating in the program both semesters this year.

First, tutors will give a 15 to 20-minute lecture at the beginning of the class.

“Then they can ask any questions they have, and then we have a ton of practice tests, so they can go ahead and take those,” Logan said.

Schmidt, a sophomore, said she likes the fact that the program is free and accessible to students who can’t afford a prep class.

“They’re the ones that are trying to get needs-based scholarships and a lot of times you have to have a good GPA for that, so like, they need the money and they need to do well on it, too, so I think it’d be good for them,” Schmidt said.

Schmidt said she has seen more and more people come to the HA meetings, many of which are excited about helping out with the new ACT prep program.

“I think it’s really cool seeing the enthusiasm in their eyes, knowing that they’re getting involved and making a difference right away,” she said.