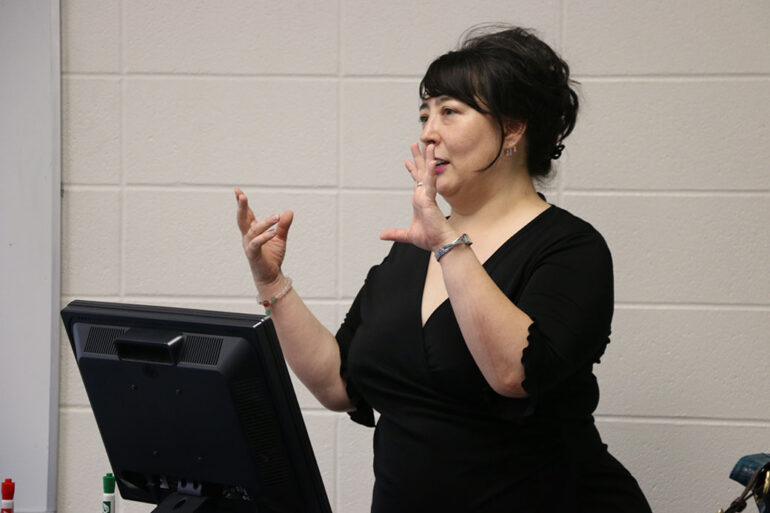 South Dakota has a new ambassador of poetry.

Roripaugh grew up in Laramie, Wyo., and began writing at a young age. She said she was influenced by her father, who was also a writer, and by her mother’s Japanese heritage.

“My poetry tends to engage with issues of identity of being mixed race or looking towards aspects of Japanese culture,” Roripaugh said.

She also said her love for writing has carried over into the classroom.

“It’s rare that your job coincides with the thing that you love. My art and my work are very intertwined, so I feel very lucky about that,” Roripaugh said.

Duncan Barlow, a professor at USD, first met Roripaugh in 2009 when he invited her to be a guest reader at the University of North Florida. He described her as being very bright and empathetic from the first moment they met.

Barlow said Roripaugh’s poetry is “breathtaking” and “descriptive in a way that really spoke to me.”

Barlow added she is deserving of being South Dakota’s poet laureate because of the strength of her work and because of her engagement in the poetry community.

“I think Lee represents the academic, modern poet. She’s forward leaning with her writing and she’s engaged in the field of poetry more so than most people I know,” Barlow said. “She’s a great ambassador for the school and for the state. She’s been here long enough that she really understands the people and the world of South Dakota.”

One of Roripaugh’s graduate assistants, David Levin, has been working with Roripaugh for more than three years and has worked with her in both a classroom setting and as an assistant to the South Dakota Review magazine.

He said Roripaugh is “relentlessly positive” and helps students understand difficult material through her dedication to her students.

Levin said Roripaugh deserves the title not only for her poetry, but also her work within South Dakota.

“I think that she makes for a good representative for our state as the poet laureate because she does an awful lot of traveling throughout the state,” Levine said. “She does a good job of getting to all over the place and exploring in a way that I think is important to someone who has a position where they represent the state.”

Apr 25th, 202216
On March 27, the annual Violin and Viola Studio Performance took place in Colton Hall. The event was...
Verve