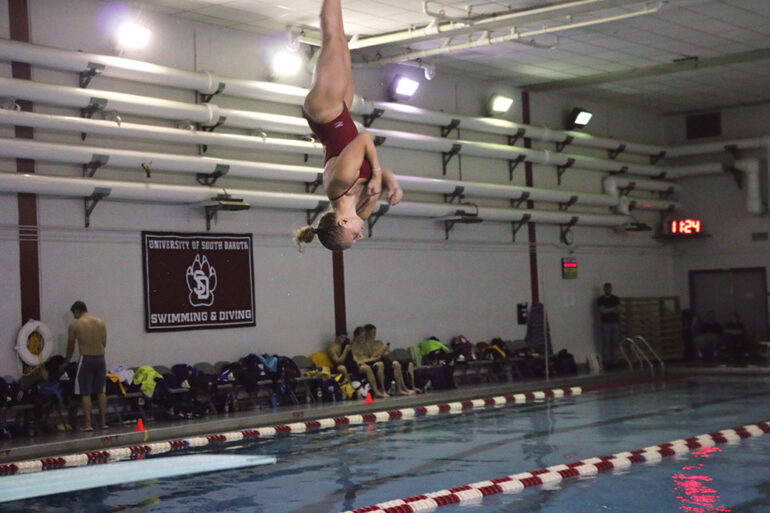 Sports
First-year diver Sarah Schank does a flip during a dive at the USD home meet versus Western Illinois Saturday afternoon in the DakotaDome. Malachi Petersen / The Volante

The Coyotes let their swimming and diving talents do the talking this past Friday and Saturday.

First-year Colorado native Quinn Fawcett started her collegiate career off with a bang, winning the 200-yard freestyle by two seconds over first-year Chelsea Calhoon, finishing with a time of 1:57.55.

Junior Greysen Hertting swept the diving events, scoring 267.20 in the one-meter dive and 311.20 in the three-meter.

First-year Theresa Godlewski started the meet off by putting the USD swim team in good positioning in the 200-meter medley relay, first-year Erin Kleiner then finished it off with a split of 27.85, putting the USD women at the top of the leaderboards.

Junior Greysen Hertting swept the diving events yet again, scoring 267.75 in the one-meter and a score of 234.60 in the three-meter, scoring a combined 22 points in two events.

First-year Quinn Fawcett took to the waters of the DakotaDome for the second time of her collegiate career and won the 200-meter freestyle with a time of 2:13.02, scoring 11 points for the team.

On the men’s side, first-year California native Hunter Padgett led the way, breaking the 400-meter school record with a time of 4:11.42, a record that had not been touched since 1996.

Both Padgett and Testa’s dominating performances earned them both Summit League Swimmer and Diver of the Week awards.

After two days of meets, with the women crushing Minnesota State and the men and women both shutting out Western Illinois, the Coyotes lead a sweep in the Summit League’s weekly individual awards.

The men will look to continue their run Nov. 6 in Ames, Iowa, while the women will hope to top the leaderboards come Oct. 22 for a home meet at the DakotaDome.