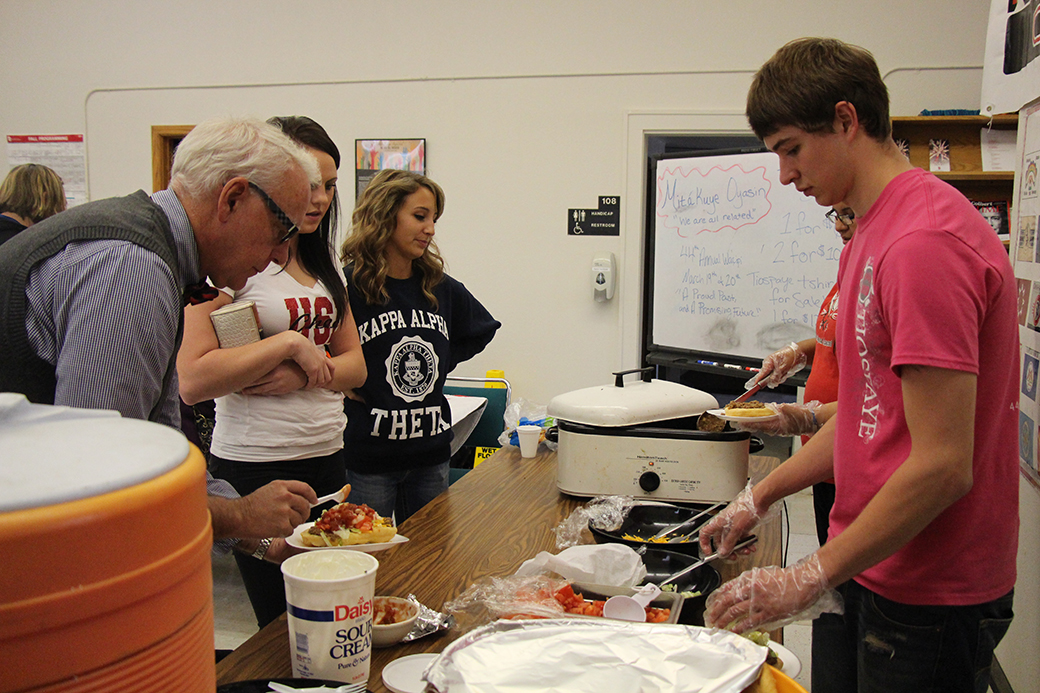 After coming from Yankton to the annual Wacipi held in the DakotaDome for five or six years, first-year Selena Olvera knew she wanted to be part of Tiospaye Student Council.

Now a member, she’s more excited than ever about what she’s been able to help with so far.

“I really wanted to be a part of the whole program and all the events they do, just how it’s a big Native center,” Olvera said.

Olvera said she’s especially looking forward to helping with the Monster Stomp that Tiospaye will host at the end of October. The event will include games for kids of all ages and is only one of many events the organization is hosting this year.

The second of their Indian taco sales, held on the first Tuesday of every month, turned out a better success than the first. That increase was largely because of more advertising, Tiospaye President Collette Bowman said.

“Once we got started, it’s really good,” Tiospaye Vice President Tyler Seidel said. “I’m really glad that a lot of the members in the group are getting really involved with it.”

This year, the group decided to switch things up a bit, mostly by using a different recipe for the taco frybread, Bowman said.

“Every family has their own recipe that they would use, and so we decided to incorporate that and bring it here,” she said. “We’ve had lots of compliments on our new recipe so far.”

Bowman said the organization is looking to plan more events for next month.

“We’re looking to do more activities in November, which is Native American Heritage Month, so we’re planning on working with some other student organization on campus to bring some events,” she said.

Taco sales, along with other event earnings, contribute to the funds used for the Wacipi in the spring, Tiospaye’s biggest event.

“A lot of fundraising, get a lot of help out there, and it’s really nice to get people going to that, especially from all of the community,” Seidel said.

Meetings for Tiospaye are held every Wednesday at 5 p.m. in the Native American Cultural Center, and everyone is invited to attend, Bowman said.

“A lot of the times they’re not just informational meetings. We like to do family nights, where we bring games and make a home-cooked meal for our members,” she said. “Tiospaye means extended family in Lakota, and so we like to be that for not just Native students, but every student here on campus.”

(Photo: Members of Tiospaye Student Council serve tacos on Tuesday in the Native American Cultural Center. Sales from the event, held monthly, go toward funds for the annual Wacipi and other events. Josie Flatgard / The Volante)