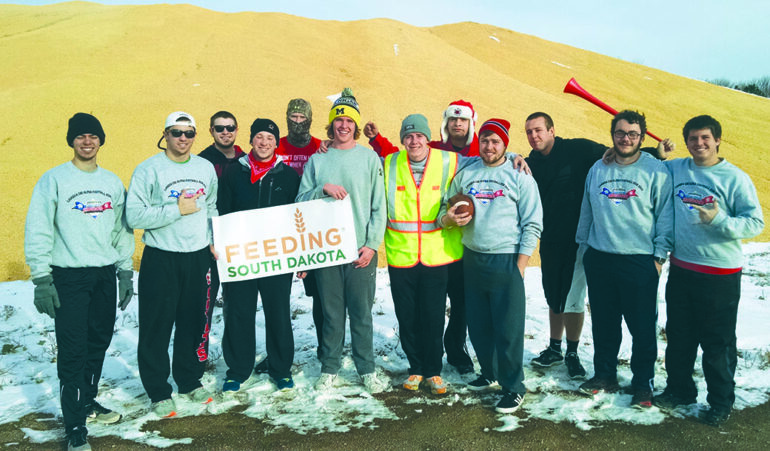 Events
Members of the Lambda Chi Alpha fraternity celebrate their accomplishments during the 2014 football run. The fraternity is hosting the run to raise money for Feeding South Dakota, the local branch of Feeding America. Submitted Photo / The Volante

This week, in honor of the USD vs. SDSU football game, members of the Lambda Chi Alpha fraternity are taking part in a football run to raise money for Feeding South Dakota, the local branch of Feeding America.

The run is one of a number of events that are part of the South Dakota Showdown Series, which is being put on by South Dakota Corn.

The run starts at South Dakota State University in Brookings on Thursday and will end Saturday in Vermillion during the football game tailgating party.

Members from both USD and SDSU Lambda fraternity chapters will be participating collaboratively to raise money, and will run the rivalry game’s football 137 miles along Highways 14, 81 and 19.

Andrew Kost, a senior member of USD’s Lambda fraternity and the lead organizer of the event, said the runners will have to average about four minutes per mile.

“So at that rate, it’ll be a little over 18 hours,” Kost said. “We’ll start Thursday and try and run from about noon until sundown and then come back at it again Friday morning and do the same thing. Then Saturday morning, we’ll be done by about noon.”

The fraternity has rented out 12-person vehicles which will drive in front of the runner during the run. At each half mile, runners will swap out and they continue this cycle until the end of the day.

Both fraternities will then return to their schools for the night, but will meet again the next day to pick up where they left off.

USD’s Lambda Chi Alpha fraternity has 53 members, while SDSU’s has 20 members. Depending on class schedules and other conflicts, many of these members will be joining in on the football run.

Because obtaining quality and a proper quantity of food can be difficult for some families, the purpose of the football run is to celebrate the USD vs. SDSU football game, while still acknowledging those less fortunate and helping to raise awareness and money for this cause.

Last year, the football run raised enough money to give each family below the poverty line in South Dakota more than a pound of food.

This year the fraternity’s goal is to raise as much money as possible, and hopefully have enough success to continue on the tradition of the football run in future years.

“How it works is $5 gets you a half mile, and $10 gets you a mile, and you can also assign those miles to other members,” Bankston said.

In addition to this form of donation, a person or an organization may also sponsor a mile. For instance, a person can choose to donate $1 per mile, which equates to $137. Donations can be accepted through the fraternity’s GoFundMe page.

Any donations made to the event can be beneficial, as winter is a time of year when many families can struggle even more financially.

“I think the timing of the event is nice because winter brings hard months for people with jobs like farming, who don’t have a constant source of income during the winter,” Kost said.

The event raises money for a local cause that many fraternity members feel is an important issue.

“Coming from the social work department and as a social work major and looking at marginalized groups, food insecurity is something that can be detrimental to the future of an individual, whether it’s a sense of security or being able to be properly nourished,” Bankston said. “The question of when the next time you’re going to get a meal – it robs a lot of people of feeling like they can enjoy their day.”

The Lambda Chi Alpha runners can be witnessed finishing the run on Saturday at the tailgate outside the DakotaDome, where the game ball will be delivered.

Apr 25th, 202216
On March 27, the annual Violin and Viola Studio Performance took place in Colton Hall. The event was...
Verve