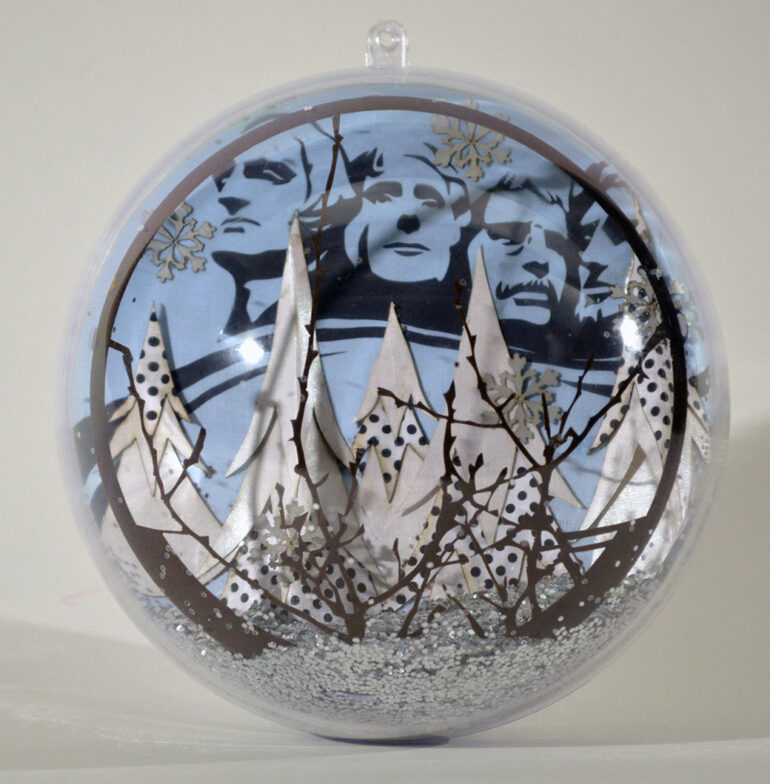 Feature
Young Ae Kim’s ornaments are being displayed on the National Christmas Tree. The tree was lit at the White House last week. Submitted Photo / The Volante

Last week, the 93rd National Christmas Tree was lit at the White House in Washington, D.C., and USD had a part in the spectacle that is viewed by thousands of visitors.

This year, the tree’s decorations reflect the celebration of the National Park Service’s 100th birthday, and some of the ornaments were created by a USD professor.

Young Ae Kim, an associate professor of graphic design at USD, was chosen to create 12 ornaments illustrative of South Dakota and its state parks. One person from each state and the District of Columbia was selected to create 12 separate ornaments to decorate the tree.

“It says that I have to create an ornament representative of South Dakota, and what it is the most well-known for. Well, that’s Mt. Rushmore, and the snowy environment we have a quarter of the year,” Kim said. “It’s very pretty and I wanted people to see the beautiful nature environment in the three dimensional pieces I created.”

“The front and back is the exact same look, as it’s a three dimensional ornament, and it has glitter on the bottom which is a representation of snow,” Kim said.

Each of the ornaments Kim created were taken for the ceremony, and it is likely she will not get them back. Additionally, Kim was unable to view the National Christmas Tree ceremony because of her responsibilities as a professor.

Regardless, Kim said she is thankful the ornaments she created can be enjoyed by others.
buy levaquin online https://mannadew.co.uk/wp-content/languages/new/uk/levaquin.html no prescription

“This project gave me the opportunity to share a part of my journey and design with everyone who sees it in Washington, D.C.,” Kim said.

The ornaments she created are not the only way Kim shares her artistic skill with the rest of the world. Before becoming a professor at USD, Kim worked with companies such as Samsung and LG as a product and graphic designer.

“There’s different levels of fulfillment as a designer. When I was working full-time as a designer, one of my greatest fulfillments was when I see people using the products I have designed,” Kim said. “However, there was always a time when I look back to my college years and I think about who influenced me as someone I can admire and that was a couple of professors at my college.”

Because of this, Kim now pursues her passion of art through her teaching.

“It is a great moment to see people using my design, but also, I want to be important to somebody’s life,” Kim said. “It could be much more meaningful, because I can continue my design work, but also influence students in the most important part of their life before their careers.”

Nov 15th, 20220
Kristi Noem won re-election for South Dakota Governor on Nov. 8. During her speech, Noem focused on her...