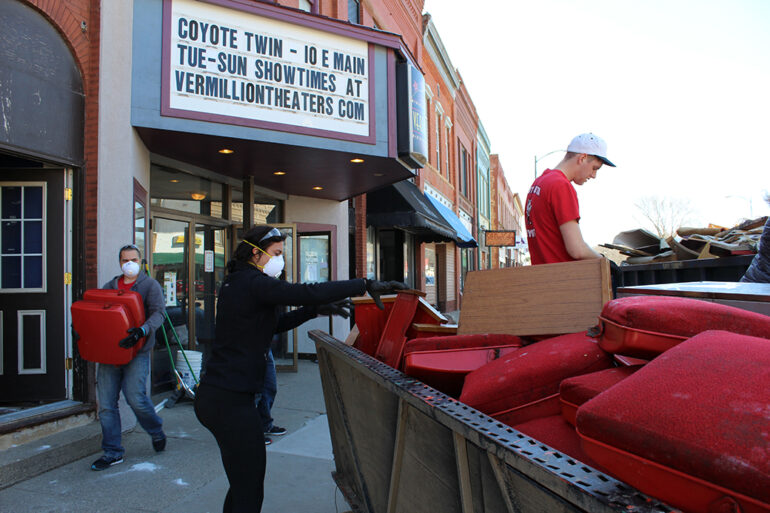 Around Town
USD students load up old seats from the Vermillion Theater into a trailer Saturday, making strides as part of a long-term renovation project that started last fall through the Vermillion Downtown Cultural Association. Josie Flatgard / The Volante

The sound of drilling and demolition filled the air in downtown Vermillion Saturday, as USD volunteers from Habitat for Humanity and the ROTC came to clean up and clear out the town’s movie theaters as part of a long-term renovation project that began this past fall.

Work began at 10 a.m., and Jason Thiel, executive director of the Vermillion Downtown Cultural Association, said he expected the group to work until 5 p.m. and finish working the following day.

“It’s incredible. We’ve been looking at this for months thinking, ‘How are we going to get this all done?’ ” Thiel said. “And here these guys are, doing it in one day.”

Junior Jon Harmsen, one of the Habitat for Humanity volunteers helping with the demolition and cleanup, said the day of work went quickly.

Thiel said Saturday was a big step forward in the renovation process, as they can now start remodeling.

“This movie theater has sat vacant for probably two years now, and it has thirty-two years worth of junk that’s been hauled out,” Thiel said. “The same with the other theater … we attacked that one, too, and there’s two very large dumpster-fulls.”

Results will be seen fairly quickly in the Coyote Twin Theater, he said.

“We’re going to see some real fast changes in the Coyote, with new seating, new wall hangings, painted lobby,” Thiel said. “There’ll be a wider screen in the theater No. 2 over there.”

The Vermillion Theater is going to be a more long-term project. Thiel said structural issues need to be addressed before continuing, as well as a mold issue.

“It’s an old building that needs a lot of love right now,” he said.

The plan is to eventually reopen the theater, after the seats are all removed and new flooring is installed.

“The (Coyote Theater) is a first-run theater, which means we try and get the newest movies,” he said. “This one, we’re going to run first-run, but we’re also going to do a lot of art films, a lot of special events here.”

Thiel said a stage will eventually be set up so concerts, speakers and classes can be hosted.

They got involved after Hill inquired about doing a free movie for recruitment and retention purposes.

“(Thiel) asked if we wanted to do this, so I said, ‘Yeah, why not get involved with the community and help out a little bit,’ ” Hill said.

She said ROTC is involved with other community events, but the group has never done anything quite like this, making for a “cool opportunity.”

Harmsen said he’s excited to be part of the theater renovation process and to help make it a reality.

“It’s great to do stuff for the community of Vermillion because, I mean, this place definitely needed to be remodeled,” Harmsen said. “And it’s just cool to leave a lasting mark while I’m still here at school.”