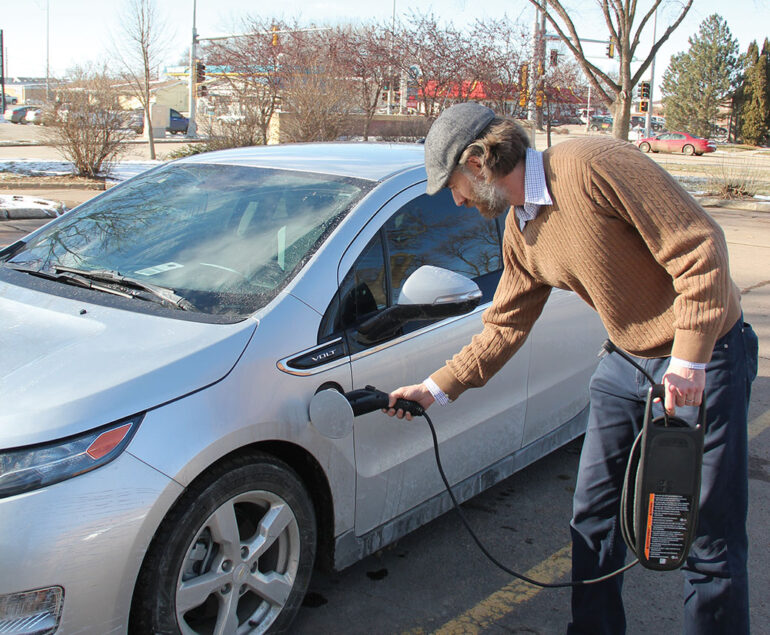 Campus
Assistant professor Joseph Tinguely demonstrates how he charges his electric car, a 2013 Chevy Volt. Tinguely can drive about 25-30 miles with the charge before the gas-powered generator kicks in. Josie Flatgard / The Volante

Joseph Tinguely hadn’t expected to own a 2013 Chevy Volt when he drove it off the lot earlier this year.

“It was not planned,” he said. “My car died unexpectedly, and I needed one in a hurry, and I had a day to pick a car.”

Tinguely, an assistant professor in the philosophy program, said the car salesman asked him, ‘Would you like to take a look?’ and he said, ‘Why not?’

The electric car helps guide the driver’s habits and monitors the efficiency of the acceleration and braking that’s done. This has changed Tinguely’s driving behavior, making him apt to accelerate more slowly and brake more gradually, he said.

“It has made me more aware of how to drive efficiently because I want my car to be happy with me,” Tinguely said.

The car portrays its happiness by displaying the fuel economy on a screen in the car and encourages the driver to adjust the climate settings in an effort to be more efficient.

Justin Moss, lecturer in both the sustainability program and the philosophy program, discussed the car with Tinguely after he purchased it.

“When he told me he got it, he was wondering if he had sort of done the right thing for environmental reasons, like along the fuel efficiency, CO2 emissions line of thinking, and so we investigated,” Moss said.

They found the Volt is much better than a gas-powered car in terms of fuel efficiency and CO2 emissions. Moss said the efficiency varies based on where a person lives.

“In any case, you know, the less fuel you burn, the less particulate matter and air pollution your car emits, and that’s a great thing,” Moss said. “Not just for pollution reasons, but also because air pollution’s a really serious public health problem.”

Once the electric charge has been spent, the car switches over to generate energy through its gas-powered generator.

According to Chevrolet’s website, the “Volt recharges with a 120-volt portable cord in approximately 13 hours or with a professionally installed 240-volt charging system in approximately 4.5 hours.”

Tinguely said when the battery is completely used up, it can take all night to recharge in his garage.

The battery lasts about 25-30 miles, he said, which is about half of his commute time to Vermillion from Sioux Falls. After those 25 to 30 miles, the gas generator kicks in.

Without a place to charge his car, Tinguely drives home at the end of the day using the gas generator.

Prescott said if the demand grows for an electric car charging station, the city may work to capitalize on the idea. For now, though, he said he’s not aware of many electric cars in town.

Moss thinks public charging stations could be in the cards for Vermillion, especially as more car companies release all-electric models.

“Eventually, as prices for electric cars keep going down, as the charging infrastructure is built out, eventually yeah I think you would see more electric car infrastructure in Vermillion, though I don’t have any special expertise for that,” Moss said.

In South Dakota, Tesla Motors, an auto company that specializes in electric cars, opened three Tesla Supercharger stations — one in Rapid City, one in Murdo and another in Mitchell. Keloland News reported in 2013 that Tesla’s plan was to connect the East Coast and the West Coast, allowing drivers to easily make it from one station to the next after charging their car for 30 minutes. The company now has more than 600Supercharger stations around the world.

Tinguely recognizes the negative impacts humans make on the environment, and said he knows changing the cars people drive won’t solve all problems. But in buying this car, he thought one thing he could accomplish would be to create a demand for this specific product.

“If all other things are equal to me, if I’m looking at different jobs, and they both can do the job, if I can help create demand for these kind of products, then that will be a placeholder until other people can also take advantage and increase the demand,” he said.