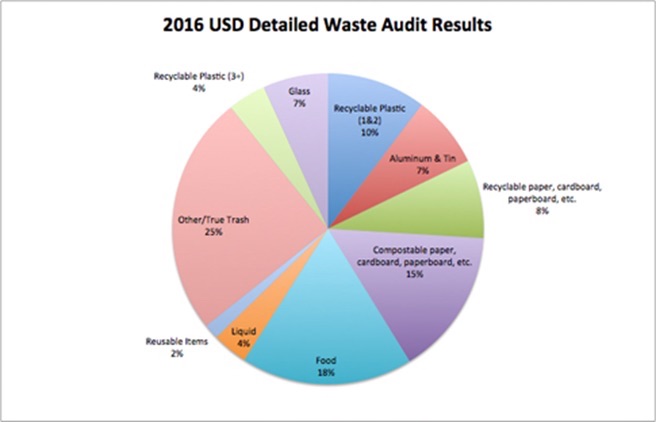 Despite the presence of recycling bins on campus, USD doesn’t have an official recycling program. In fact, a majority of recyclables collected around campus are actually thrown in the trash.

After a university waste audit was completed earlier this month, the President’s Committee on Sustainability is awaiting a recycling evaluation from Verdis Group, an environmental consulting firm. The results of this evaluation will then be discussed and, hopefully, implemented on campus.

“I think we just need to have a recycling program on campus,” said Meghann Jarchow, a sustainability professor and member of the President’s Committee on Sustainability. “There is no recycling policy.”

While there are recycling bins on campus, Jarchow and Scott Pohlson, chair of the President’s Committee on Sustainability, have both confirmed that recyclables collected in university buildings don’t go to the recycling center. Instead, they’re thrown away.

“The MUC is the only entity that has a recycling plan and I think it’s through Student Services – graduate students help take out the recycling, but only in the MUC,” Jarchow said.

Jarchow said the newer buildings on campus all came equipped with recycling bins in them, but because there’s no actual recycling program, their content is essentially treated as waste.

This used to be the case in the MUC, Jarchow added.

“People felt bad that there were these bins in the MUC, but knew full well it was getting thrown away,” she said.

Though the MUC has been this way the past couple of years, the change hasn’t extended into other buildings around campus, such as the Beacom School of Business and the Wellness Center, Jarchow said.

Jarchow added that recycling in residence halls is left up to the discretion of each hall director.

The recent waste audit confirmed these claims. Part of the waste audit involved collecting 18 random bags of trash from different buildings around campus. The content of the bags was then searched and sorted by sustainability students. 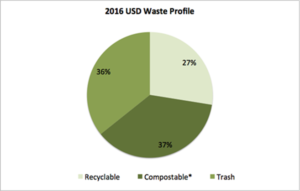 Verdis will be using these results as part of an overall evaluation that will be presented to the President’s Committee on Sustainability May 22. Once the committee has the results, they’ll be discussing the next step for the university.

Pohlson said the committee isn’t going to put a set dollar amount on how much they plan to spend on a recycling program at this time, as they are more concerned about studying the current recycling situation.

“What we said is, just focus on recycling because that’s the issue as a university – based on the survey –  is the No. 1 thing everyone wants to see improved,” Pohlson said.

Pohlson said it could take as long as a year to see a program implemented campus-wide.

“The first steps might be looking for the budget pieces and seeing what it takes to do this,” he said. “I think as a leadership team the goal would be to make an initial first step, whether that’s a pilot in a certain building, which I think is probably where we’d start.”

The timeline and scope of a potential recycling policy is uncertain at this point, Pohlson said.

“I don’t want to guarantee for all of campus, but maybe we can have something in place this fall for when students return because over the summer we can talk about it more,” he added.

Pohlson said creating an effective program is complicated — things like design and placement of bins can make a difference, as well as the vendor, he said.

“We … don’t want to bring in a (recycling) truck from Sioux City or Omaha or Sioux Falls because then we have the emissions issue that we’re dealing with and it gets messy,” he said.

Pohlson said the university is mindful of sustainable practices.

“We’re actually a lot better than what students think we are. We do little things but they’re not the sexy things like recycling – they are little things like, how do we approve our efficiency from energy usage? Do people keep their windows shut or how do we turn off our heating and cooling systems? Because there is dollars associated with that savings, too.”

Pohlson added that securing funding for a recycling program will also take time.

“There are two areas of funding. One would be internal funding, so our current budgets, or there might be some grants out there that we are going to take a look at. There is a grant that was sent to us that we are going to work on writing to see if we can get some funding for that,” he said.

Though it may take time for the university to get a campus-wide program running, SGA is working on a program that would fund sustainability projects starting next semester.

“The sustainability fund … was essentially going to be a fund for students to come to SGA or someone else and get money for projects to improve sustainability on campus whether it was water bottle refill stations or other sustainability programing,” said SGA President Nathaniel Steinlicht.

Steinlicht said money for the fund, which will have $4,985 next fall, will come from SGA unallocated funds.

“We took the number of students that are currently reported here at the university and said that each one essentially contributes 50 cents to this fund,” he said. “The amount of money given out would depend on how much they ask for and how many people apply for the fund.”

The President’s Committee on Sustainability will be deciding where the money from the sustainability fund goes. Steinlicht said this is because the committee has a better idea of what the next steps for sustainability on campus are, along with more opportunities to help students if funding fell short.

“We have members that are on that committee so SGA will still have a little say on how that money gets spent,” Steinlicht said.

The early deadline for the application is Sept. 16 and the final deadline is Sept. 30. Any funding that’s not awarded during the fall will be available for students to apply for in the spring.

Jarchow stressed the importance of getting a recycling program on campus.

“It’s hard to move to anything else in terms of sustainability if you don’t have a recycling program,” she said.  “My hope is that some of these things get administration more excited about sustainability.”