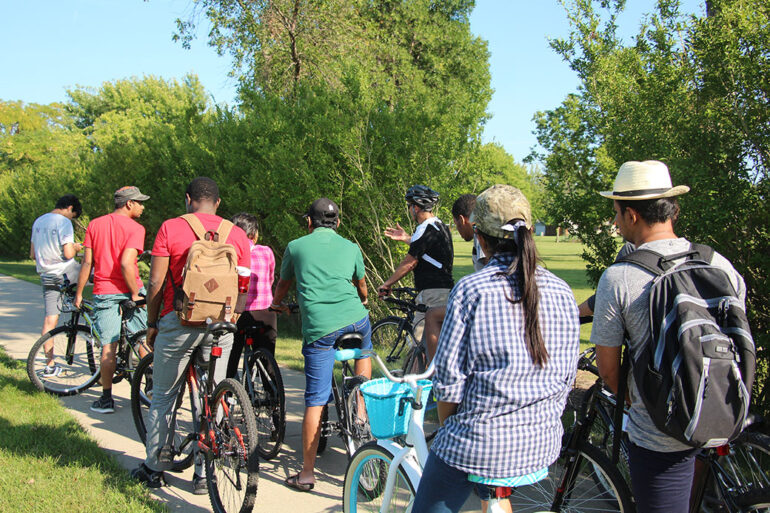 Diversity
Kevin Brady, back center, shows the soccer field at Barstow Park to international students who participated in the Vibrant Vermillion bike ride on Sunday. Mason Dockter / The Volante

This weekend a dozen of USD’s international students had the opportunity to hop on a bicycle and take a small guided tour of town as a part of the Vibrant Vermillion bike ride.

The event was co-sponsored by USD’s International Club and Recycle 605, a local bicycle co-op that fixes abandoned bicycles and gives them to people in the community.

Most of the students don’t have bicycles of their own, but were lent bicycles for the Sunday afternoon ride by Recycle 605.

Kevin Brady, co-founder of Recycle 605 and a leader of the day’s ride, said international students typically don’t have many transportation options when they arrive in the state, limiting their ability to explore and become involved in the community.

“They have nothing—no car, no bike, everything is walking,” Brady said. “You see very few international students with vehicles.”

Sunday’s ride was meant to show students that bicycles are a convenient, quick way to move around and to explore new places, and to show them that Vermillion is a very bike-friendly town. Brady, along with Jessi Wilharm, a fellow co-founder of Recycle 605, said they understand that purchasing a brand new bicycle is something many students simply can’t afford.

A few of the international students who went on the ride were, in fact, shocked when Brady told them his personal bicycles have cost as much as $3,000.

The bicycles offered to the students by Recycle 605 are available at a lower price, $50 in many cases. Immediately after the ride, two students decided to purchase Recycle 605 bikes.

With the success of Sunday’s ride, Brady said that similar rides may be coming in the future.

“I’m guessing that we would be very happy to make this an annual event,” he said.

Rajbhandari, who went on the ride, said she had a good time, particularly on the lower Vermillion bike trails that run near the Vermillion River.

“It went really well,” Rajbhandari said. “I would say it was awesome.”

Brady said the ride was a success—the students enjoyed it and they learned about places in Vermillion they had never been to, including Cotton Park in lower Vermillion and the soccer field at Barstow Park. He also took the opportunity to explain bicycle safety and traffic regulations.

“They seemed genuinely happy,” Brady said. “They seemed interested in exploring by bicycle (and) they really seemed to enjoy each other’s company.”