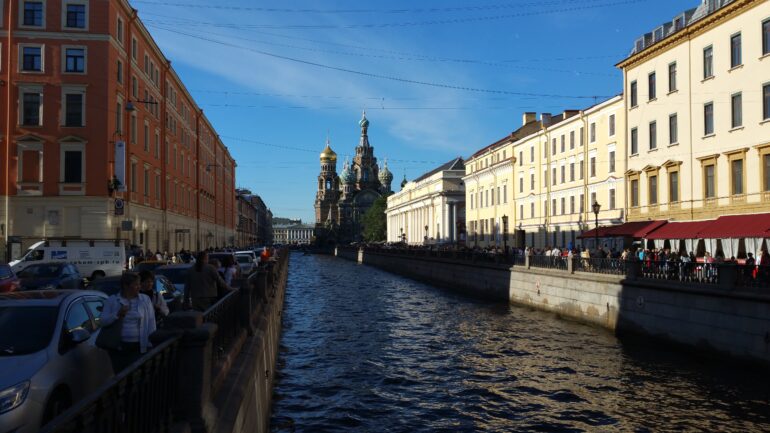 Diversity
SuengHee Han took this photo in the Russian city of St. Petersberg. In the foreground is the River Neva, and in the background is the Church of Our Savior on Spilled Blood.

Some might say Eastern Europe isn’t the greatest travel destination for college students on vacation, but Han SeungHee went there anyway. Han, a junior majoring in criminal justice at USD, spent his summer touring Eastern Europe, where he witnessed and experienced discrimination firsthand.

Han visited a total of 15 countries over the course of almost two months this summer. Han’s journey started in St. Petersburg, Russia.

Russians, Han said, have a tendency to discriminate against Middle Eastern people. The Russians treated Han fairly well, he said, but he saw several cases where people who appeared to be of Middle Eastern decent were treated unfairly in interactions with the police.

Han thought that the obvious Russians’ attitude toward Middle Eastern people was partly thanks to a cultural willingness of Russia to express its feelings toward others openly.

Still, despite an apparently tense relationship with the Muslim community of Russia, Han said that Russia doesn’t suffer the same degree of Islamic State terrorism as other places.

“So much terrorism happens in America or other European countries, but I never heard terror happen in Russia,” Han said. “I believe it, because Russians take care of Muslim people very strongly, so that’s why terror never happen in Russia.”

Among the countries that are openly rude to Asians is Ukraine, Han said.

At one point in Kiev, Han said he was not allowed into a club because he was Asian. Another time, at a restaurant in Ukraine he visited with an American he met on the trip, Han said the waiter assisted his American friend, but failed to even address Han.

“Han has two qualities that stand above all of his other great characteristics: his courage and sense of adventure,” Zimmer said.  “First, Han is not unique in the sense that he decided to enroll in a school thousands of miles from home. Many people do these sorts of things. What separates Han is his audacity to embrace the cultural differences and language barriers. This takes courage.”

Even living in the United States can be difficult for someone from South Korea. Patrick Morrison, the assistant director of International Student Services, said it’s easy to forget that degree-seeking students such as Han are here year round and face many challenges most students don’t even have to think about, such as compliance with federal regulations on international students, but even more simple things such as the fact that many international students haven’t experienced a harsh winter.

“They are pretty much just like any other USD student,” Morrison said. “Their challenges are just unique and different.”

Han’s ability and willingness to live and be a student at USD, shows his adventurous attitude. This sense of adventure and curiosity is what made him want to go to Eastern Europe, despite the discrimination he might face. Besides some of the discrimination he faced, Han enjoyed his trip to Eastern Europe, saying that in most of the countries he visited, the people were polite and kind.

“Sometimes I want to eat my country’s food,” Han said. “(But other than that) I am just still curious about some other countries.”