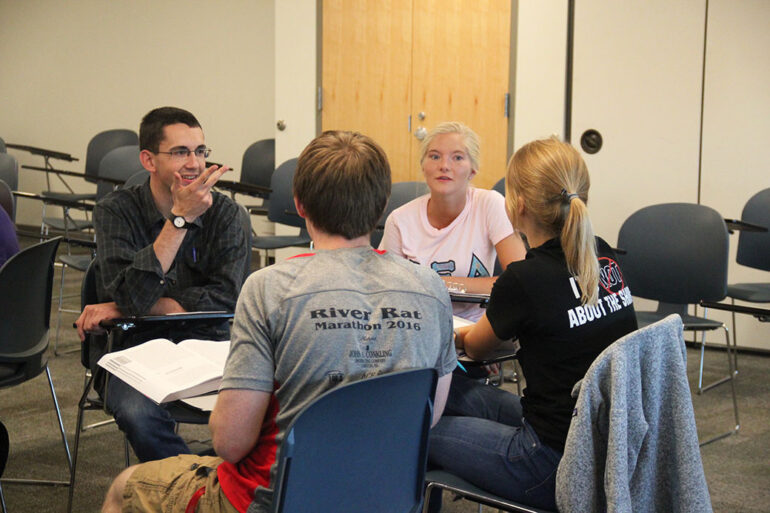 Students wanting to study diversity in all its forms can now do so while working toward a new minor offered by USD in Multicultural Studies.

“A whole range of different departments can get on this,” said Lamont Sellers, associate vice president for diversity and an instructor for the minor’s intro class. “A lot of students are already taking courses that would be incorporated in this minor. It’s quite possible…that they could already be on their way to completing this minor. With a few extra courses, they could already have this minor under their belt without much effort.”

The minor is an 18-credit interdisciplinary, and students will have to take nine hours of required courses and electives to fulfill the minor. The minor includes a variety of classes ranging from human sexuality to gender and media.

Sellers said the into course is a great way for students to really get into discussions about what is happening in the world today.

“I’m really excited and it was really fortunate to be able to talk about those kinds of things,” Sellers said.

KC Herman, a senior who’s in Sellers’ Intro class, said that it’s “fantastic” that USD is offering a minor that introduces people to different perspectives, even if they aren’t familiar with certain topics.

Some topics discussed in the class focus on “-isms,” such as racism, sexism, heterosexism, ableism, ageism and more. These topics and more are discussed so students going further into the minor are able to go into their other classes with a “critical lens” for looking at various issues, Sellers said.

Xuyen Nguyen, a junior, is interested in how the class focuses on many topics that require deep discussions.

“I really like discussing topics on race and oppression because that’s what I’m most familiar with, but I also like other subjects as well because I’m not as familiar with them,” Nguyen said.

Nguyen said USD implementing the minor was a good choice for students to immerse themselves in topics they don’t know much about, and also realizing that diversity is an important subject.

“The U.S. is a melting pot of rich and diverse cultures,” Nguyen said. “We’re gonna begin to see a lot of societal shifts, so I think it’s important for us to prepare for that by interactions with other people outside our race, gender, social class.”

Herman said he enjoys the class because of Sellers, and like that he can work to bring forth more discussion from his peers.

“I go a little extreme and all in-depth just to get other people (to talk),” Herman said. “It’s fantastic whenever you get a chance to learn something not about yourself.”

Sellers said the minor is important for students who will work in companies with people who come from different backgrounds, and these courses will give them the upper hand at relating to and understanding diversity.

“We’re really looking at this minor as being a way of our students being able to show that through these courses and through these things, they will have that ability where they can really be able to dive into diverse populations and be able to thrive and succeed wherever they’re placed,” Sellers said. “Just because we’re here in South Dakota doesn’t mean they have a disadvantage.”