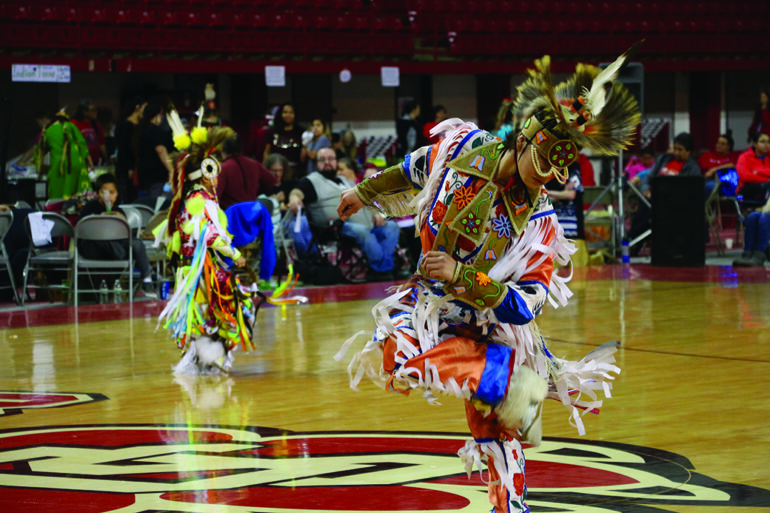 Diversity
A dancer at the 2016 Wacipi performs in the DakotaDome. South Dakota is miraculously one of the four states that has changed the name from Columbus Day to Native Peoples Day. Since then, several cities across the country have followed this example. File photo / The Volante

Columbus Day, a nationally recognized holiday, is a distant echo from the celebrations of Indigenous Peoples Day. These two different names and what they each represent share nothing in common. They are in fact the complete opposites of each other.

Columbus Day celebrates the “discovery of the Americas” — at least for those of European descent. This description chooses to ignore and disregard that if an entire people and established civilizations already occupy this land, then it cannot be “discovered.” Celebrating Indigenous Peoples Day, as South Dakota proudly does, defies the original context of the holiday to take a stand against this collective myth that Christopher Columbus is a hero who birthed the way for the “true” establishment of this nation.

Due to a generously put mistranslation of history, somehow history textbooks have “overlooked” a most horrible travesty: the genocide of Native Peoples. These crimes that Columbus himself committed, being that of brutal murder, rape and enslavement, would indeed only be the beginning for an attempt at annihilation, where its extent can be felt and heard even today.

Educational curricula in general often leave out these important details affecting those of a skin color besides white. School children only know about the battles between the cowboys and Indians and are not taught what actually started this fighting. To truly teach history, education must include every single angle of historical events to see the entire picture and truly comprehend the good and bad moments of America’s past.

People are not entirely at fault for their lack of knowledge regarding the history and culture of Native Peoples, but it’s not to say that they can’t do anything about that now. Columbus will not live posthumously in the hearts of Native Peoples as the mighty discoverer. Especially when their very circumstances that they were placed in and are still in today, such as poverty and the loss of lands, languages and cultures, are all owed to the moment Columbus set his first step on what is now called American soil.

South Dakota is miraculously one of the four states that has changed the name from Columbus Day to Native Peoples Day. Since then, several cities across the country have followed this example. For the sake of Native Americans and really every American, universally changing the name would make a lasting impact and statement about widespread respect. Such an action would show how much we as a society have changed from our originally very brutal, ignorant ways toward a brighter future for all races.

Let us not forgot all that has happened to create the world we are in today, and let us not blindly celebrate holidays that are an extenuation of a time past that is simply a cold reminder of the vicious murderer that, for a while, got away with his atrocities without questions. Let us celebrate the unity that is budding in the air. Let us celebrate our culture as American people, whose legacy is that of acceptance of all people and all cultures. Let us celebrate the Indigenous People of America, and admire the strength and the resiliency it took for them to be here today.