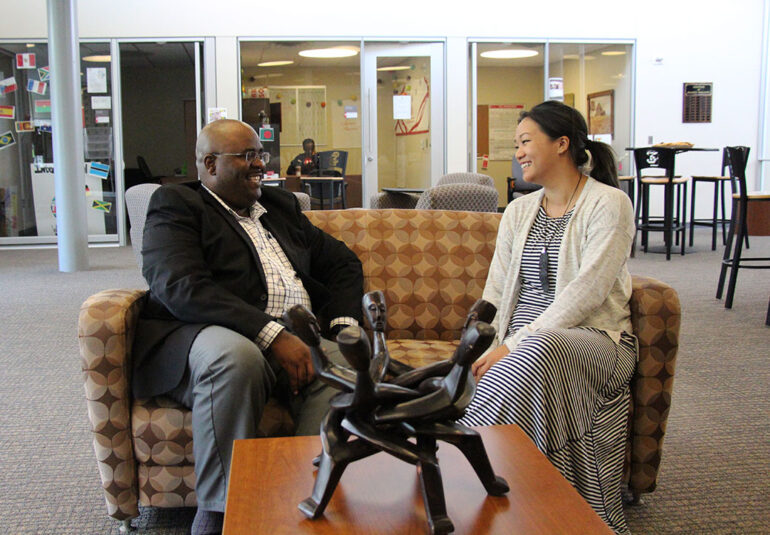 Campus
Lamont Sellers, left, was recently named associate vice president for diversity at USD, and will be taking on larger roles to connect with students, faculty and staff. Lena Tran, right, is the intercultural program coordinator for student services and has worked with Sellers for more than a year. She says one of her favorite things about working with Sellers is how they work together. File Photo / The Volante

Former director for the Center for Diversity & Community Lamont Sellers has been promoted to associate vice president for diversity, filling the spot of Jesus Trevino.

Sellers has been at the University of South Dakota since September 2014, and said this position was “a good move” in furthering his plans for diversity and inclusiveness.

“It’s been a process that started 14 years ago when I got to the University of Denver,” Sellers said. “I felt like it was a next step for me as far as my career (and) an opportunity to continue the work, the foundation that has been laid with inclusive excellence here at USD.”

President James Abbott named Sellers AVP for diversity because of his “significant experience at USD,” and received the support from the President’s Council on Diversity and Inclusiveness to give Sellers the job because of his ability to work with faculty, staff and students.

“As I look at it, it’s sort of a dual role here,” Abbott said. “Lamont is an individual who can do both — (interact with) both faculty and students. He was the best all-around candidate. (Sellers was) simply a good candidate.”

Before coming to USD, Sellers graduated from Shaw University, a historically black college in North Carolina, and worked as a high school math teacher in Virginia before being introduced to diversity training.

After becoming a diversity trainer, Sellers said touring the south and visiting some historical sites, such as Martin Luther King, Jr.’s church in Atlanta, Georgia and the Voting Rights Museum, he said he “knew he needed to do more,” and went to graduate school at the University of Denver. There, he met Trevino and worked with him as a graduate student.

Sellers worked his way through the ranks while attending school full-time. He accepted a position at Misericordia University in Dallas, Pennsylvania, though he said it “wasn’t for him,” and left after seven months and moved back to Virginia to work at Regent University as an academic adviser for six years.

From then, Sellers applied for the director position at USD, noticing that Trevino had also been at USD, too.

“It was like a hand in a glove — a perfect fit,” Sellers said.

Sellers, though still remaining in the same office, has more duties to take on as associate vice president for diversity, such as working with other administrators, faculty members and deans in how to continue to move USD forward with diversity and inclusive excellence; working with the president’s council on diversity and inclusiveness and helping to advise and coordinate efforts needed to be done through the office for diversity. Something that has changed is that Sellers will no longer be helping with programming for the CDC.

Lena Tran, the intercultural program coordinator for student services, has worked with Sellers for more than a year, and said one of her favorite things about working with Sellers is how they work together.

“Our work dynamic is the epitome of what diversity is,” Tran said. “Lamont has components of empathy and really valuing his staff, giving them the freedom to succeed and grow and really be creative and innovative. Our relationship conveys that with the success of the CDC.”

Sellers’ short term goals include updating the website with the marketing department and making it better, and fixing the safe zones training. Long term, he said he would like to find a way to diversify not only the students, but faculty and staff. Also, figuring out how USD is measuring how its doing in terms of diversity and inclusiveness, is something Sellers said he is “very interested in.”

Sellers said his new position is an “exciting opportunity” to create a dynamic for the office of diversity that is more visible and accessible to the USD community.

Chika Osunsanmi, a junior and a member of the African Student Association, which Sellers advises, said she was “so happy” upon hearing about Sellers’ new position.

“It was well-deserved,” Osunsanmi said. “He’s a very hard-working person, very considerate, caring and very involving… I don’t see anyone else that would be best for the job.”

Tran was “extremely excited” when Sellers was promoted, and said that since she knows Sellers personally and professionally, it was a good fit for the university.

“It’s a really inspiring story of where Lamont came from,” Tran said. “For him to get this position is inspiring to all the black boys out there to see someone persevere and make it to the top. He can really advocate for students, and I believe our university will move to the right direction with him being there.”

Though it hasn’t been decided yet, Sellers said he’s working on getting his previous position filled.

With the new position, Sellers said he’s able to work more closely with the university as a whole, and is “excited” for the future.

“I’ve said it on several occasions, and I know it sounds cliché, but I absolutely love my job,” Sellers said. “Coming to work and being able to work with the students, and even the faculty, staff and administrators that I have worked with over the past two years coming into my third year of being here has been a really great experience… I absolutely enjoy being a Yote.”