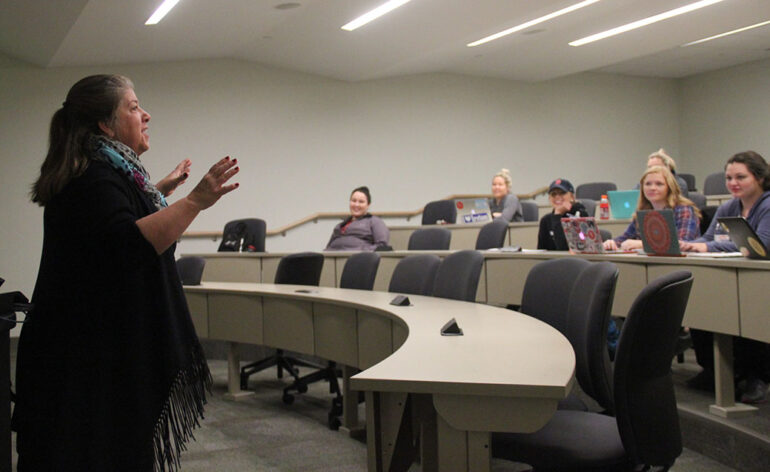 Campus
Health services administration assistant professor Carole South-Winter lectures a class on Monday. South-Winter said one way or another, students in her field will be employed, regardless of the fate of the Affordable Care Act. Mason Dockter / The Volante

With talk of the Affordable Care Act possibly being replaced by the current administration, conversation surrounding the future of U.S. healthcare is occurring more frequently within some health administration courses.

The ACA, informally referred to as Obamacare, is the U.S. healthcare reform law that provides more readily available health insurance for Americans.

Though there’s been talk since the passing of the ACA in 2010 to have it repealed, the Trump Administration is pushing for a repeal as soon as possible. And with a Republican-controlled Congress, the possibility of repealing the Act is now quite real.

For some, the move to repeal the ACA isn’t exactly surprising.

“I actually expected it,” said assistant professor of health service administration Carole South-Winter. “It’s going to be quite a process; things are moving quickly (these first weeks) of the Trump Administration.”

Health service administration major Kate Liveringhouse said her biggest concern with the potential repeal of ACA is the clause that allows young adults to stay on their parents’ healthcare plans until they turn 26.

“Personally, I didn’t know of any of the implications as much as I did job-wise, just because I didn’t know what it was going to be like when I was off of my parents’ (insurance),” Liveringhouse said. “The only thing that would impact us significantly would be if, for some reason, they took away being covered under your parents.”

“Definitely looking if the ACA is repealed, one thing that has definitely concerned me is I’m going to graduate school at some point, and because of that, an income isn’t necessarily applicable,” he said. “… It’s our generation who may have been somewhat of the downfall of the ACA because a lot of times, it’s easier for us to accept the fee without taking insurance. But still we weren’t able to accept the problem with the young individuals when we’re kind of healthier in our life.”

South-Winter said she talks about the repeal process a lot in her courses.

“The day after the election, I went to my classes and there were (mixed reactions) but I think for the most part they were concerned about their future as health administrators,” she said. “I told the class that it doesn’t matter what you feel about this politically, because it did take eight years to put ACA into place, and it’s going to take at least that long to unravel this and put something else in place.”

Because her students are going into health administration, South-Winter said this appeal will be good for them.

“It’s great job security for them regardless of your personal opinion of it,” she said. “Our work, it’s good for us, whether you like the policy you’re enforcing or not. It’s good for this field.”

South-Winter said not many students are aware of existing healthcare policies, even ones that affect them.

“I don’t think that my students know that they’re on their parents’ health insurance. Unless they’re in my class, I don’t think they know that it was a part of the ACA,” she said. “To them, they were 10 years old – who’s paying attention to health care when they’re 10 years old? They’re not understanding that this can be pulled out from underneath them.”

Hensley said that, while the ACA has its flaws, it’s still “one of the biggest pieces of legislation that’s ever been passed on healthcare reform in the past few decades.”

“My overall view on it is that it’s kind of status quo with what we’ve done in the past,” he said. “It’s the nature of our politics; we’re a bipartisan politics system where there’s always a winner and a loser. No matter who you support, when the winner is in charge, they’re going to want to put in their own legislation. We have a cobbled mess that doesn’t necessarily function the way we want it to.”

True healthcare reform, South-Winter said, might only happen as a result of education reform.

Liveringhouse said the ACA was good in theory, but executed incorrectly.

“I think we talk about it in class a lot, like the intentions of it were always very good, but sometimes the way they kind of went about it wasn’t necessarily agreeable among all people,” she said.

Hensley said students should take healthcare into their own hands and be engaged in the caring for themselves.

“One of the biggest things I’ve seen is, a lot of times we do a lot of reactive care instead of proactive care. A lot of times, we’ll let our symptoms go untreated for so long,” he said. “Educate yourself on the facts, educate yourself on what’s actually going on and don’t just take the status quo. Research it because that’s kind of what got us into this in the first place.”