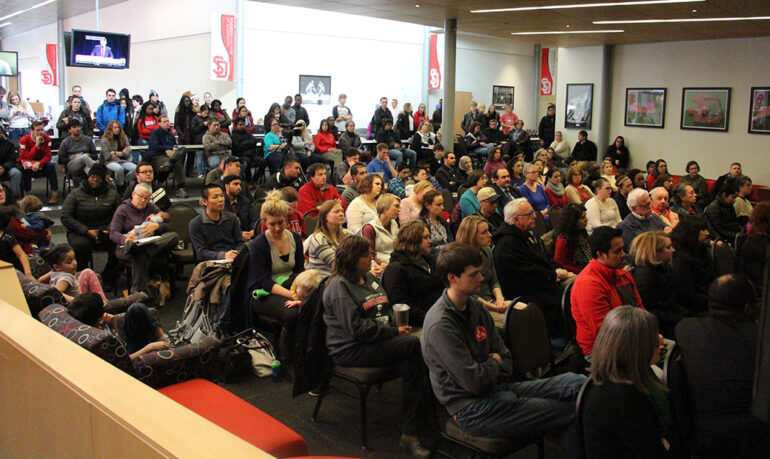 Campus
USD students and faculty gathered in the MUC pit lounge on Feb. 2 to listen to a panel discussion on President Trump's recent executive orders on travel and immigration to seven Middle Eastern countries. Morgan Matzen / The Volante

President Trump’s recent executive order barring travel and immigration from several Middle Eastern countries has caused concern and fear for many international students, and criticism from some faculty members.

One critic of the new order is political science professor Tim Schorn, who gave a speech on the topic to the Vermillion Rotary Club on Jan. 31.

“People who had been granted the legal right to come into the United States were prevented from doing so,” Schorn said. “None of the countries that were on the list could be pointed at as being primary producers of terrorism in the United States. Because of how the policy was rolled out, it is a question of how this could have any positive impact on our desire to control or eliminate ISIS.”

Schorn was critical of Trump’s language in the order and the idea that the ban was targeting Muslims, he said.

“It will probably create international belief that says we’re engaged in a religious war,” Schorn said. “Some of the language used by the Trump administration says that we’re essentially targeting Muslims. That really isn’t the direction we should want to go as a country.”

One common worry among students was traveling home after the semester and returning for the fall. Computer science graduate student Suneel Bandarupalli came all the way from India to study at USD.

“I want to travel home, but can I in this situation?” he asked. “Those are my doubts.”

In response to some students’ fear, the Center for Diversity and Community hosted a campus forum Feb. 2 on the ban and how it will impact students.

Lamont Sellers, associate vice president for diversity, said the event was helpful to those who participated.

“This event helped answer some lingering questions students had and helped hear from some experts in the field,” he said.

One of those experts was Henry Evans, an immigration attorney based in Sioux Falls who has been practicing law since 1996. His best advice for students and all those concerned was to stay in the U.S.

“As long as [non-citizens] stay in the U.S., there will be no impact at all,” Evans said. “Stay here and don’t obtain any criminal convictions. Study hard and enjoy college.”

Roma Trivedi, a sophomore finance major from Kenya, said she was worried for her peers.

“There are changes in current visas, how are they going to affect international students?
buy veklury online https://mannadew.co.uk/wp-content/languages/new/uk/veklury.html no prescription

It just concerns me what will happen to students,” she said. “They are here to study, get an education and go back.”

Miyuraj Harishchandra, a biology Ph.D. student from Sri Lanka, said he’s concerned for his family back home. He decided that he was going to wait longer than expected to return home from the U.S., for fear that the ban might spread to Sri Lanka, and that he might not be able to make it back in or out.

“I was planning to go back home in the summer, but I have changed my plans because I don’t want any hassle when I come back,” he said. “If I return, then I would have to wait. I think I will wait three years now. I have grandmas who are waiting for me to be there. Time passes and I don’t want them to die when I go.”

Fawwad Hussain, a computer science graduate student from Pakistan, was critical of the ban and said he wanted to understand the changes that would be put into place, either permanently or temporarily.

“[The ban] is very inhuman,” he said. “The people that are coming for higher education do not want to be banned and having all these issues with immigration. There should be some change in the policy so that students can attend universities wherever they want to go so they have some basic rights.”

Schorn saw a similar lack of compassion with Trump’s ban. He noted that the U.S. does not allow refugees to enter at this time.

“[The ban] makes us look really selfish and unconcerned about humanitarian catastrophes like the civil war in Syria,” Schorn said. “The United States does significantly less than a lot of other industrialized countries and it is really based in selfishness and fear.”

Sellers clarified that although South Dakota doesn’t have any defined sanctuary cities, which are places that will not enforce immigration laws, USD will continue to uphold its policy of inclusive excellence.