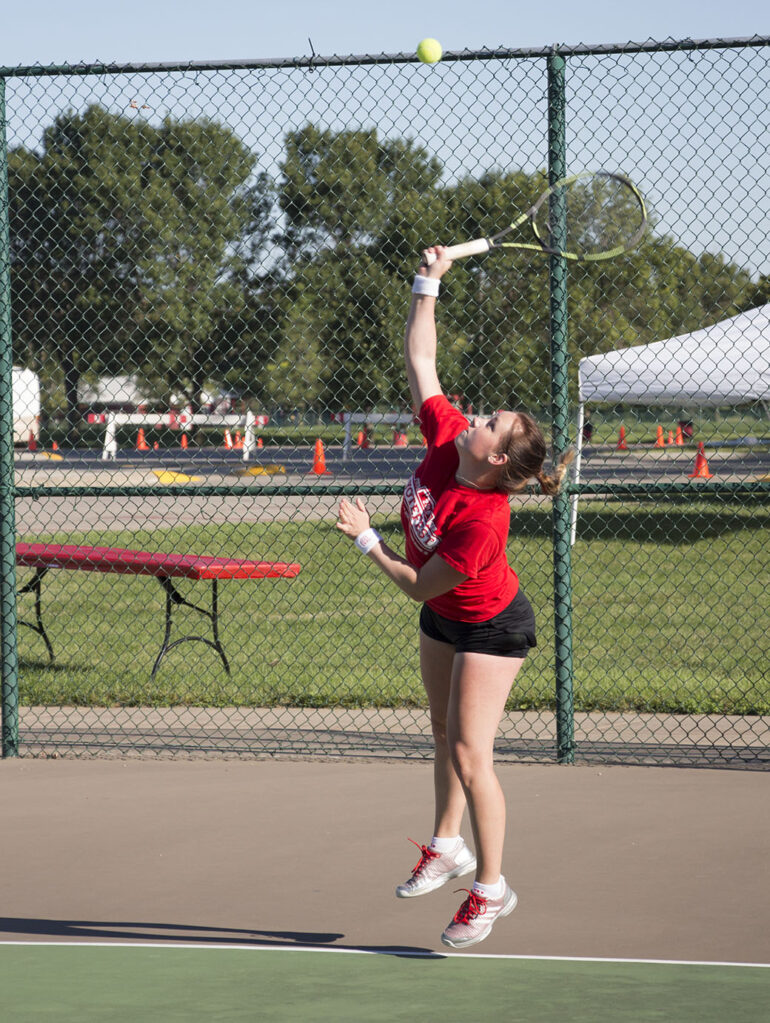 Sports
Freshman Nanette Nylund serves a ball during a practice at the USD tennis courts. File Photo / The Volante

This year has been a rollercoaster for the USD women’s tennis team, but the team may be coming up again at the perfect time.

The Coyotes have gone 5-11 this season overall, but four of those wins have come in the last eight games.

Individually, several players have been making strides to help lead the turnaround by providing success in their own matches.

Sophomore Ellie Burns has been a major cause in leading the team’s comeback. She has now won seven singles matches in a row entering Sunday’s match against Western Illinois. Senior Yuliya Sidenko is also bringing her own seven-match win streak into Sunday.

Along with her individual performances, Burns also has paired up with junior teammate, Hannah Wich, to win six of their last seven doubles matches.

Despite a rough start to the season, Burns thinks her turnaround has already begun.

“I struggled with injury and sickness initially, but at this moment we are playing well as a team,” she said. “I think I’ve been playing well, too.”

Burns was also named Summit League Player of the Week twice in a row earlier this month.

“For her to get it twice in a row, it’s pretty cool,” said head coach Brett Barnett said. “Ellie gets recognitions, which is good for the program, but it also resembles her progress.”

“We’ve been playing better. You know, it’s kind of a work in progress,” Barnett said. “We’re getting it together, at the right time I would say.”

The team played on Friday and Saturday in Green Bay, WI. They took on Wright State the first night and Green Bay the second night.

After struggling against Wright State, where only Sidenko and Burns picked up wins in the 5-2 loss, the team nearly pulled off an outright sweep with a 6-1 win.

Barnett said he thinks the team is still getting better, despite a few flaws.

Barnett said he has high hopes for the team as they finish out the season.

“It’s pretty much all Summit League play from here now,” he said. “We hope all our players keep well so we can play our normal full strength line-up. If we are able to do that I think we are going get some good results. Hopefully get in the tournament.”

Burns said her focus nearing the end of the season aligns with the team’s goal.

“I’m working on the conference alongside everybody,” she said. “Our next game is a home match and then we are going away to Denver so these last matches are going to very important for the season.”

The Coyotes’ next match is at home against Western Illinois on Sunday, and then in Denver on April 7.