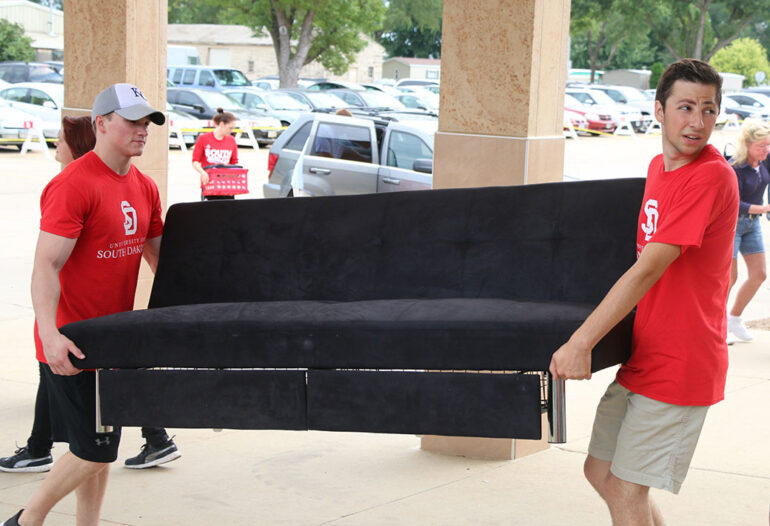 Campus
Students move a futon into North Complex during move-in day earlier this year. Room furnishings, like this futon, will be taken by members of the sustainability capstone class and donated, instead of being thrown out at the end of the year. File photo / The Volante

At the end of a typical school year at USD, dumpsters outside North Complex overflow with relatively new futons, microwaves, mini-fridges, lamps, rugs and other room furnishings that students can’t or don’t want to bring with them for the summer.

This semester might be a little different, thanks to a group of sustainability students working on “Give and Go,” a campus waste reduction program for their sustainability capstone class. The program hopes to gather students’ unwanted futons, mini-fridges and even unused foodstuffs and cleaning items, and redistribute them to charity and the community.

Kriston Lynn, a senior sustainability major and member of the capstone class, said the leftover furnishings will probably be given to Goodwill, or possibly Yankton’s Habitat for Humanity, where the items could be used to furnish homes.

“Right now, we just want to get them back out in the community so they’re not just being thrown away,” she said.

The group is working with Bob Iverson, Vermillion’s solid waste director, who has offered bins from the recycling center to use for the project. While the students have little concrete data on how much students throw out each year, Lynn said Iverson offered first-hand accounts of dorm waste.

“He sees, like, dozens of futons some years, being just thrown away, just perfectly usable stuff,” Lynn said. “And so he’s really excited to reduce that waste.”

Donations to Give and Go will be on a voluntary basis, with a drop-off area operating at North Complex during finals week. Mashaya Thompson, a senior sustainability major, said the program will begin April 29 and end May 5.

Donated furniture or appliances don’t have to be in perfect condition – the group will accept non-functioning room items, Lynn said.

“We’re going to have signage up on dumpsters and stuff, going, ‘Hey, if this is usable, bring it to us, and we’ll take care of it,” she said. “And we’ll also be able to recycle broken things for them, so if they have a broken mini-fridge, or microwave or something, we can recycle those rather than just throwing them in the dump.”

The concept of collecting and re-using students’ unwanted room furnishings has caught on in other places in the past few years, Lynn said.

“This is something new that’s taking off across the country,” she said.

Andrew Phelps, a senior sustainability major, said the group wants to find a way in the future to give students’ unwanted furniture to other students, rather than only donating or recycling it.

“In the future, we want to set up like a thing that we can hold it (the furniture) somewhere and then re-sell it back to other students that move in, in the fall,” he said.

Students that donate furniture and other items will be included in a drawing for gift cards, Phelps said.

“That’s just an incentive for students to actually participate in it,” he said.

Lynn said they’re all hoping to get many students on board with the project.

“This is a real easy way to reduce waste on campus, and it helps the community too,” she said.

Sometimes students – and people in general – adopt an “out of sight, out of mind” attitude when throwing things out, Thompson said.

“People aren’t really self-aware of the issue of where our waste ends up at,” she said.