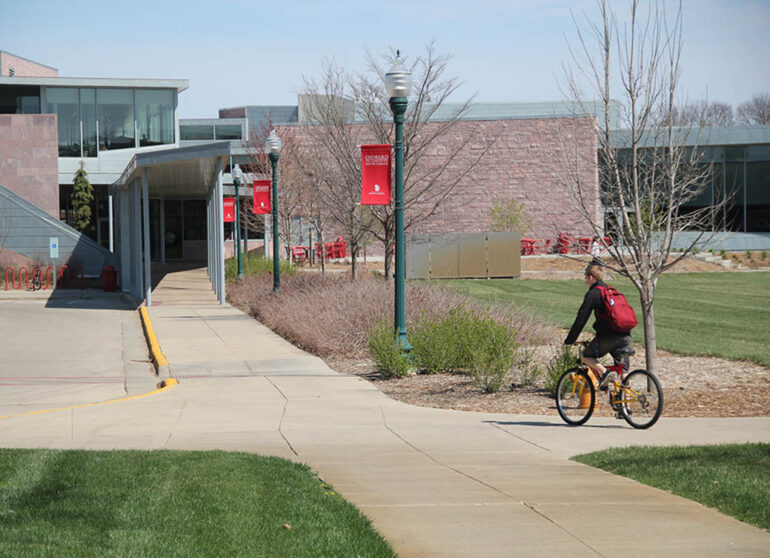 Campus
USD student Kory Hanlon rides his bicycle near the Muenster University Center Tuesday afternoon. The 12 bikes in the new bike share program will be located on this side of the MUC. Mason Dockter / The Volante

There will soon be a new way for students to get around the community, even if they don’t own a bicycle or car.

Members of the sustainability capstone class are working to get 12 red Jamis cruiser bicycles on campus as part of a new “bike share” program.

The program allows students to borrow a bike for free to get around town. The bicycles are expected to be on campus by next week.

Brooke Wigdahl, a senior sustainability major and participant in the capstone class, said the group is planning to have a “Green on Green” event April 26. The sustainability event will promote the bike share program as well as other green activities.

All 12 bikes will be located at a station on the west-facing side of the Muenster University Center until the group determines the best spot for them.

“We are going to have them all in the same place right now,” Wigdahl said. “This is kind of like the pilot part of this program. We’re going to see how it works and where people want to have bike stations.”

The bikes will be locked at the station and keys will be available for checkout at the MUC desk. Helmets will also be available, but are not required.

Aidan Beck, a senior sustainability major and a student in the capstone class, said bikes will be available for anyone to use from 7:30 a.m. until 10 p.m.

Charlie Nearman, a senior conservation and biodiversity biology major, was the writer of a $4,500 grant from SGA’s Green Initiative Fund, which paid for the bikes.

Nearman said cars can be problematic on a college campus, which is partly why the group is pushing the bicycle project.

“One of the major issues that we have right now is the fact that we have a pretty limited amount of parking,” Nearman said. “So a possible solution to that would be to having kind of a bike share system, at our university that many students can utilize at the same time, so that they wouldn’t have to drive their car everywhere they go.”

Nearman was involved with sustainability club on campus, which was where the idea first came about.

“In that, the bike share program was kind of brought up to us,” Nearman said. “And we’re like, ‘Yeah, that’d be something that we could try to tackle.'”

With the bikes almost on campus and the program nearly launched, Nearman passed the project to the capstone class.

“I actually was able to kind of kickstart this by successfully receiving that grant, and then I kind of was the one that handed it over to the sustainability capstone class,” Nearman said.

One group of people the bike share program intends to serve is international students, who may not have access to other forms of transportation. Paul Formisano, a USD English professor involved in the early stages of the project, said this program should be useful to them.

“Some of this was to help international students, who may not have transportation, cars, here, to be able to get around town a little easier,” Formisano said.

Long-term, the goal is to have more bikes on campus to loan to students, Formisano said.

“The hope is that, eventually, we can get somewhere in the ballpark of 35 to 50 bikes, something like that,” Formisano said. “But this is an initial program.”

Cal Petersen, a retired Methodist minister and Vermillion resident, has been working with the sustainability club to develop the bike share program. Petersen is part of a community group called “Making a Lighter Footprint,” which has a 36-part plan to improve sustainability in the community.

Encouraging bicycling is one part of the plan, and Petersen has been advocating for bike lanes and bike racks in town to encourage bicycle usage, as well as the bike share program.

“Vermillion is so flat, it just seems logical to encourage the use of bikes,” he said.

CORRECTION: In an earlier version of this story, Aidan Beck’s name was spelled incorrectly. The Volante regrets the error.