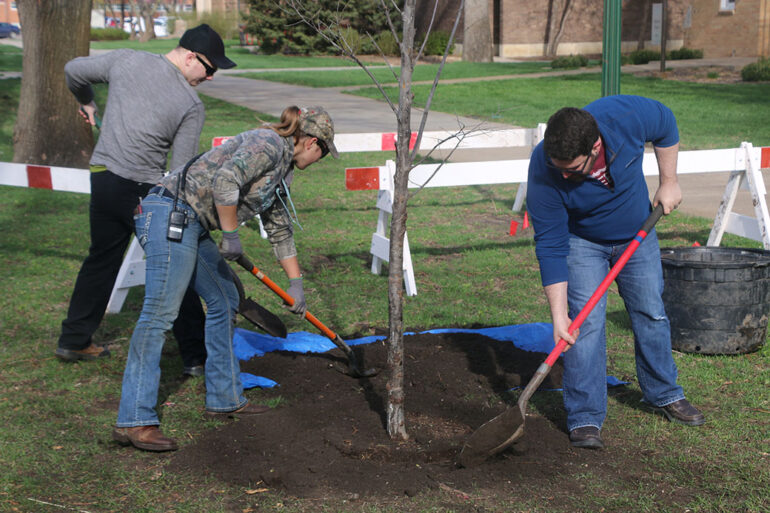 Campus
About 15 people gathered in front of Belbas on Friday morning to witness the planting of USD's newest tree, a "New Horizons" elm. Mason Dockter / The Volante

The newest addition to the USD tree community was planted in front of Belbas on Friday morning in observance of Earth Week.

The tree, a “New Horizons” elm, replaces two trees that were blown over in a storm in late December. About 15 people gathered to watch the planting event.

Nate Steele, USD’s manager of grounds and landscapes, said his goal over time would be to make USD a “Tree Campus USA,” a designation given by the Arbor Day Foundation to college campuses that put time and effort into their trees.

“Every fall we plant between fifteen and twenty trees,” Steele said. “We try to find places on campus where they fit, around buildings, and add to the landscape.”

USD was a Tree Campus USA as recently as 2010, and Steele said he’s trying to regain the title.

“Basically what we try to do, if we have to take a tree out, for whatever reason – damage, disease, construction projects – we try to put two trees back within a reasonable amount of time,” Steele said.

The elm that was planted Friday morning came from a tree nursery near Tea, SD, Steele said. The decision to go with the new New Horizons breed of elm was made because of its resistance to Dutch elm disease, which has ravaged elms across the world for the past century.

Resistance to tree disease, Steele said, is an important consideration when planting a tree.

“We want to try to increase the diversity of our tree community, so we try to pick trees that we don’t have a lot of,” Steele said. “Around fifty to sixty percent of our tree canopy right now is ash, which has this pest coming, the emerald ash borer, it’s going to be affected heavily by that.”

Steele said the New Horizons elm should be a good fit for the USD campus – the leaves turn a vivid shade of red in the fall.