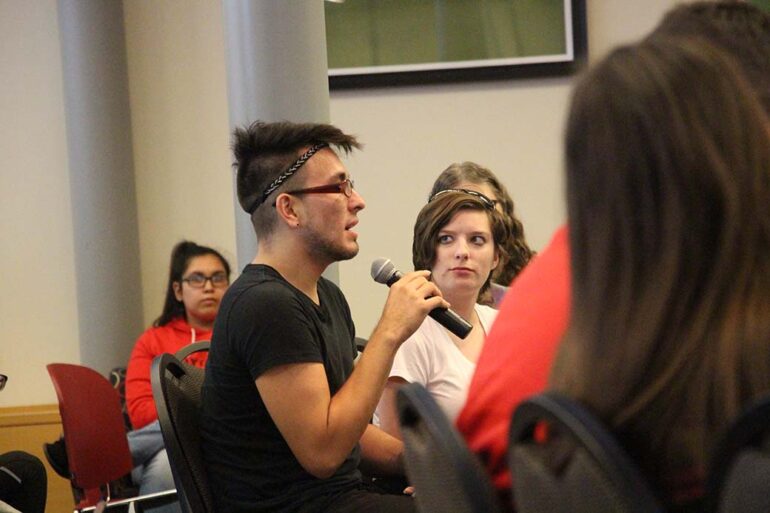 Campus
More than 100 people attended the discussion, "After Charlottesville: A Campus-Wide Conversation," which was hosted by the Office for Diversity and the Office for Student Rights & Responsibilities Sept. 6. Maria Potratz | The Volante

More than a month after the events in Charlottesville, VA sparked controversy across the nation, a conversation about racism, prejudices and education was held on USD’s campus.

Students and experts in fields such as law, health sciences, political science, history and Native American studies gathered in the Muenster University Center Sept. 6. More than 100 people attended the event, “After Charlottesville: A Campus-Wide Conversation,” which was hosted by the Office for Diversity and the Office for Student Rights & Responsibilities.

Some of the topics discussed included previous conflicts between cultures, institutionalized racism, racially-biased education and how to better inform people about issues taking place across the nation.

Minji Cho, a second-year graduate assistant at the Center for Diversity & Community, said she saw the conversation as just the beginning of USD’s efforts towards promoting diversity.

“We see this conversation as a start and are hoping to continue having this type of conversation to promote the importance of diversity on campus,” Cho said.

Event attendees discussed how the issues many people face today are similar to power struggle in the ‘60s when African-Americans attempted to gain rights and equality in a previously segregated nation.

While there was a nice turnout to the discussion, Sellers said he was hoping more students would’ve participated.

“We had quite a few faculty and staff that were there and participating, and it was good to hear their voices, but I really did want to hear more of the students’ perspectives,” he said. “But I also realize that even if someone isn’t actively speaking, it doesn’t mean that it’s not still having an impact. So even though there were many silent voices in the room, I think those voices spoke to the difficulty of having these types of conversations, but also that it takes some time for people to really internalize and consider all that really is at stake here.”

Sellers said it’s important for USD to have these types of discussions because diversity-related issues happen everywhere.

“We have students that come from literally around the world, and these issues are not things that are relegated to any particular place in the country,” Sellers said. “Things are popping up and it makes these conversations even more important because — while it may not look the same as Charlottesville, VA — there are still some things bubbling here that we just haven’t seen explode.”

Senior Angel Jones, who attended the discussion, said he thinks USD’s direction surrounding these conversations is a step forward for the campus.

“The way I see it is it might not impact the global scale, but it impacts our community in Vermillion and in this area of the state,” he said. “Small things like this can make big changes in the future.”

The Office for Diversity plans to host similar events for students and community members, Sellers said. One will be the screening of “More Than A Word,”  a documentary made by a USD alumnus that “analyzes the Washington football team and their use of the derogatory term Redskins.”

The screening will take place on Sept. 28 in Farber Hall.