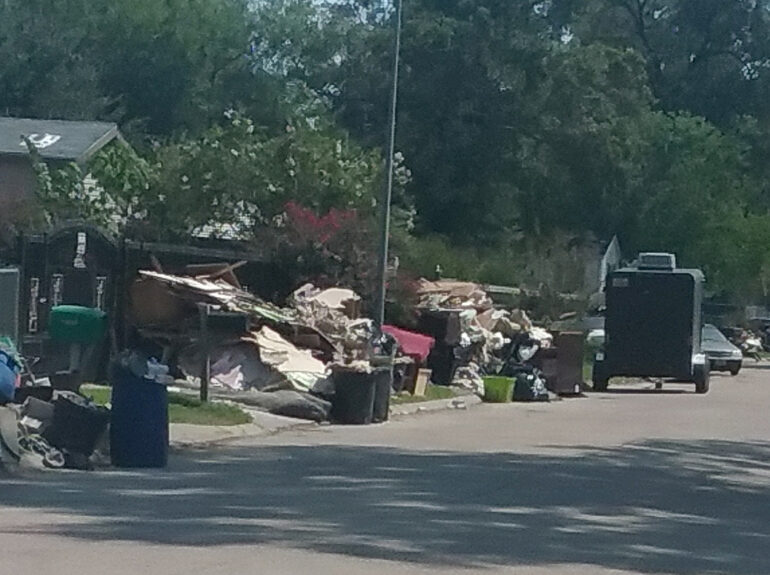 Campus
Terry Crandall, an adjunct professor in the school of education, traveled to Houston to help relieve the damage caused by Hurricane Harvey. Submitted photo | The Volante

USD student organizations and faculty members have been actively involved in providing aid for the recent hurricane in Houston, TX.

Terry Crandall, an adjunct professor in the school of education, is currently in Houston helping relieve the damage caused by Hurricane Harvey.

Crandall works as a response operations volunteer in Disaster Mental Health for the Red Cross. He’s been helping out in shelters, retrieving supplies and working in fields. Crandall said during a phone interview that his main goal is to make sure everyone is safe and have what they need.

Crandall said he was nervous to travel to Houston not only because of the conditions, but also because he was traveling alone.

“I was scared, I didn’t know what to expect,” Crandall said. “It’s a bit daunting. This is a huge operation. The people are resilient and friendly, but it’s nerve wracking and wrenching to see the children here.”

In addition to the Red Cross, several other organizations are volunteering to help those impacted by Hurricane Harvey.

Several USD student organizations have taken steps toward lending a hand in relief efforts for Hurricane Harvey in Texas and Hurricane Irma in Florida.

The African Student Association and Union of African-American Students are planning to fundraise for items such as clothing, diapers and water to send to the affected areas.

Lamont Sellers, adviser of both the African Student Association and Union of African-American Students, said the students’ help with hurricane relief is a part of the philanthropy aspect involved in both organizations.

“They are still in the planning phases of being able to engage the broader community in the collection efforts,” Sellers said. “Hopefully we’ll be able to send a substantial amount of funds or items to those areas to be able to help. We have a few students that are actually from Houston and Florida. It has a special place in their hearts.”

Marcus Destin, co-president of the Union of African-American Students, said it’s important for students to do as much as they can to help, even if they weren’t directly affected by the hurricanes.

“The hurricane in Houston impacted me personally because I grew up there and I have lots of family that is still there that had to endure the hurricane,” Destin said. “I think the university reaching out achieves the inclusive excellence standard that we have set here throughout campus. Reaching out and helping those beyond our ‘four walls’ could be the inspiration or the spark that other schools, people or the community may need to extend a hand to help.”

Crandall has been in Houston for two weeks volunteering and said the water is beginning to recede, but there’s still a large amount of work ahead.

“One interesting thing is that a hurricane is an equal opportunity disaster,” Crandall said. “Everyone is affected by it. My heart goes out to the people.”

Crandall said although the work has been difficult, he’s gotten a lot out of it.

“This isn’t about me, it’s about the people who need help,” Crandall said. “It’s scary. But it’s also so rewarding and fulfilling. I hope students are inspired to volunteer. ”

Sellers said he hopes students are successful in their efforts to make a difference.

“I think that the number one thing is to just be able to help. If it’s just one family, we’ve been able to help,” Sellers said. “At the end of the day, it’s about getting things to those that need it the most. It’s good to be able to give back and provide that assistance.”

Destin said he hopes the Union of African American Students can alleviate some stress from those misplaced in the hurricanes.

“We want them to know that there’s people looking out for them even all the way in South Dakota,” he said. “ A helping hand knows no distance. We want to show our love and support because honestly it could happen to any of us.”