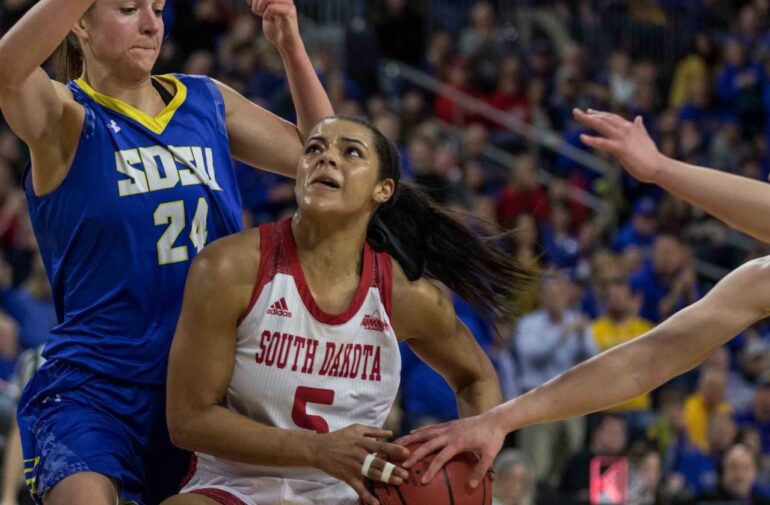 The 20-win streak by the No. 1 Coyote women was broken by No. 2 South Dakota State University in the Summit League Tournament championship. The Coyotes were upset by the Jackrabbits 50-65. This ended the Coyotes’ streak and their chance at the championship title. The Jacks will go to the National Collegiate Athletic Association Championship for the eighth time since 2010.

The Coyotes saw some momentum off and on and closed the gap by as little as seven points, but the Jackrabbits held onto the lead and played tough defense.

Redshirt senior Jasmine Trimboli said SDSU is a “very physical team,” which showed on the court.

“It was pretty difficult at times to try and get a post opportunity and try and reverse the ball,” she said. “They really got us rattled at the beginning of the game.”

The third quarter saw the Coyotes putting up more force and scoring in the paint, but was short-lived after turnovers and points made by the Jacks to end the score 65-50, Jackrabbits.

Senior Kate Liveringhouse and sophomore Ciara Duffy were named to the All-Tournament Team at the end of the game.

Duffy put up 12 points in the game, with junior Allison Arens coming in second with nine and Trimboli with eight. Duffy also had three assists and six rebounds.

“It was a tough game, obviously, for us and certainly a tough start for us,” she said. “We dug ourselves a hole. We were down nine points to begin the game and we just never really seemed to kind of gather the momentum after that. Certainly not from a lack of effort from our young ladies’ standpoint. What these young ladies have done has been nothing short of impressive and I think they really battled and proven that they can compete and play at a very, very high level.”

Liveringhouse said wherever the team ends up tournament-wise, they’ll take it “one day at a time.”