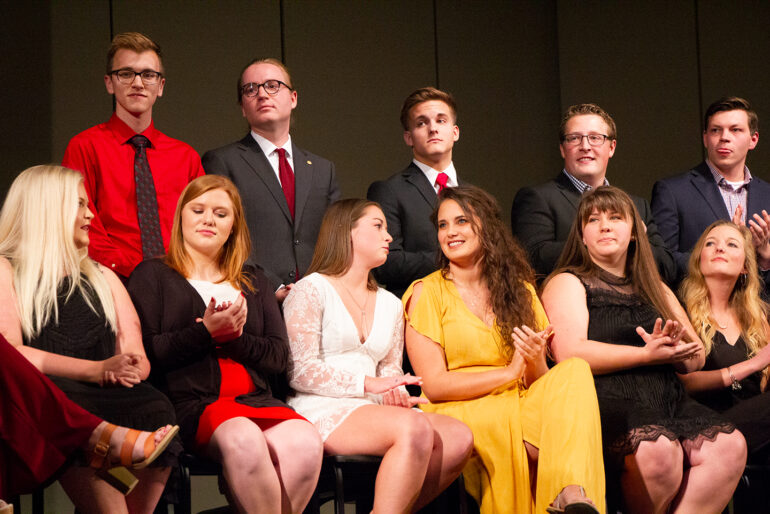 Campus
Members of the original 47 royalty candidates await the announcement of the 14 finalists. Temiloluwa Adeyemi / The Volante

The 14 finalists for Dakota Days royalty were announced at the Yotes Got Talent event on Sunday evening. Also at the event, six student acts performed their musical talents to kick off the week of Dakota Days celebrations.

These candidates will now go through the second round of voting, which will take place on the MyUSD portal from Monday at noon until Friday at 5 p.m. The Mr. and Ms. Dakota winners will be announced at halftime at the Dakota Days football game on Saturday.

Kim Grieve, vice president of student services and dean of students, who spoke at the event, said these finalist candidates now represent USD.

“For the honorees this evening, USD has shaped who you are today,” Grieve said. “You are all remarkable, charitable and very favorable candidates.”

In addition, Eldon Warner was announced as the winner of the Yotes Got Talent competition, making this his third consecutive victory at the event. The High Howlers were awarded second place, and Savannah Kirsch won third.

Katelyn Ryan, the coronation coordinator for the Dakota Days Executive Board, said the combination of the two events has helped increase participation.

“We see a lot more participation and a lot more support throughout the USD community… it is just kind of a nice way to combine two events into one and put the stress away from having two separate events,” Ryan said. “I think there was a really good turnout… it’s always kind of exciting to see everyone show up and support one another.”