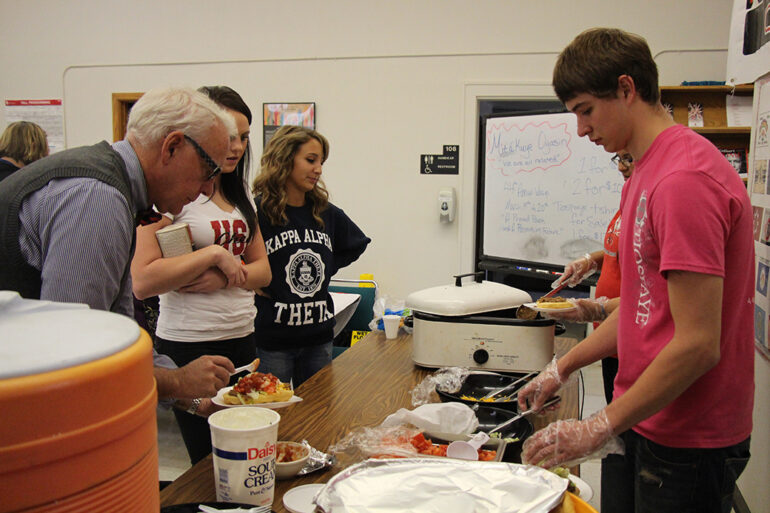 Diversity
Members of Tiospaye Student Council serve tacos in the Native American Cultural Center. Sales from the event, held monthly, go toward funds for the annual Wacipi and other events. Josie Flatgard / The Volante

Indigenous women face murder rates at 10 times the national average. Four of five Native women are affected by violence. Homicide is the third leading cause of death among this population.

November is Native American Heritage month, a time of year when Native American heritage and culture are celebrated, this month also sheds light on the issue of increasing numbers of missing and murdered indigenous women (MMIW). MMIW Awareness Week is observed from Nov. 5-9 on campus.

“To me, having an awareness week was important,” said Marisa Cummings, director of Native American Student Services. “I’m really passionate about (the) missing and murdered, and I think the way we can gain allies is by educating people and talking about it. If we don’t talk about it, people don’t even know that this isn’t a new fad that women have gone missing and murdered since contact.”

The week will include lectures from Tanaya Winder, and Anitta Lucchesi, a doctoral student at the University of Lethbridge in Canada who is creating her own database of more than 2,000 cases of MMIW in the U.S. and Canada.

A screening of “Silent No More” and a panel discussion by Faith Spotted Eagle, Ruth Ann Buffalo, Elise Boxer and Annita Lucchesi will be held Nov. 9 in the MUC Ballroom. Cummings said she’s looking forward to this event.

“That will be a very powerful panel,” she said. “I think we have some experts, in the country and in the field, people that are doing really amazing things, and I’m just excited to hear what they have to say.” 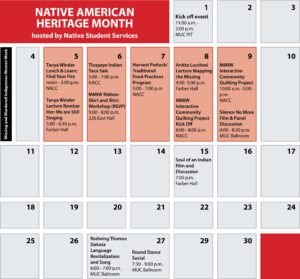 MMIW Week will also include a community quilt project, a passion of Inkpa Mani, who is a senior fine arts major with an emphasis in painting.

Inkpa said he wants people to come to the Native American Cultural Center (NACC) on Nov. 8-9 to put their own designs on pieces of paper which will be stitched together to make a blanket to represent MMIW.

To Native students at USD, the month of November is another time to celebrate their culture.

“As a Native person, it’s just another day for us,” said Jessi Bean, a senior social work and Native studies major and the co-chair for Tiospaye’s annual Wacipi. “It’s good to have a month where we can inform others about our culture and share our culture, but as Native people, we celebrate our culture and we live our culture every day of the year.”

Elise Boxer, coordinator for Native studies and an assistant professor of history, said this month connects to the larger issues indigenous people face.

“It shouldn’t just be like learning about indigenous people for one month, but at least there’s one month set aside where there’s a concerted effort across USD putting programming together to raise awareness,” Boxer said.

“We are on indigenous land, and I think it’s important we understand different groups of people even if their viewpoints or perspectives may be different than our own,” Boxer said.

Bean said the lasting memory of this month should remind people that Native people still exist.

“The biggest thing is Native people are still here,” she said. “We still have a culture that changes and adapts with the times; we’re not stagnant. There’s 573 different nations just in the United States alone. To group us all into one… we can’t do that. There’s so many different cultures and practices that we have as Native people. We’re all unique.”

Cummings said this is one more chance for people to know that Native American students are present on campus and make differences for the community.

“We want people to know that Native American students are here on campus. They’re real people,” she said. “They’re doing amazing things in their community, and they need to be recognized for that as people that are here and seen as real people, not just students that are on the reservation somewhere.”