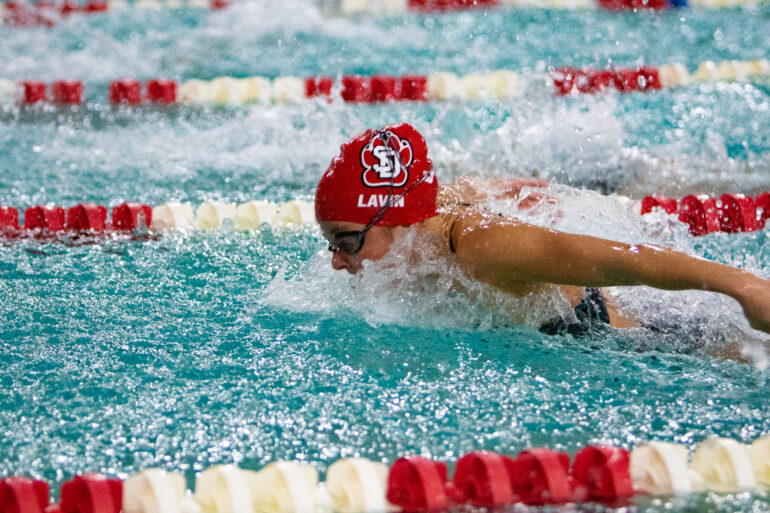 Sports
Freshman Maddie Lavin set a new pool record in the 200 butterfly with a time of 2:24.73 against Omaha on Saturday. Peyton Beyers | The Volante

Two broken pool records, victories in 12 of 16 events and a celebratory Charlie Shuffle dance highlighted a 181-117 win in the DakotaDome pool for the South Dakota women’s Swim & Dive team.

The Coyotes got off to a fast start as the 400 medley relay team finished in first with a pool record time of 4:23.78, per GoYotes.

Head coach Jason Mahowald said he was impressed by the team’s record-breaking performance.

“The medley relay, I think we just had the right four girls. Sabrina led us off at 1:04, which was really good in-season for her … we had a good relay put together for us,” Mahowald said.

Mahowald said he saw her success as a product of continued improvement.

“She’s just been getting better and better all year. We kind of knew …  she was going to get better as we got her more and more into great swimming shape,” Mahowald said.

“I think that really helps. Watching the girls get records, seeing how hard they work every day and then watching it pay off for them is really exciting and it makes you feel really good and really excited for yourself,” Quigley said.

Mahowald said that the team hadn’t beaten Omaha in a dual meet in a couple years, so “for our girls, it’s a good place to be right now”.

The win against the Mavericks was payback after they beat the Coyotes last year.

Sophomore freestyle swimmer Amy Taylor said that the team is determined to make sure that doesn’t happen again.

“They (Omaha) beat us at Conference last year, so I think that’s what we’re kind of trying to do this year is go in for second place, right behind Denver,” Taylor said.

One of the unique challenges that swimmers face is enduring a long break between races.

“You can’t really get in and warm up a whole lot and so your body produces a lot of lactic acid and then that sometimes transfers over to the next race,” freshman distance swimmer Hannah Aitkin said.

Other swimmers benefit from the break.

“Personally, I like having a larger break because you get to warm down during the dive break, which is really beneficial, but sometimes it is nice just to get them out of the way so you don’t get too nervous,” Quigley said.

While the team is satisfied with the outcome, they won’t overlook any opponents.

Aitkin said the team is committed to “knowing not to look past anybody, and coming into every meet, doing our best, knowing what to expect”.

Mahowald assured that he won’t let the team become too confident following the win on Saturday.

“I’m the coach, so I’m always skeptical, right? I expect them to be better at the end of the season and I definitely won’t let the girls run too far with this one, because if they do, it could definitely bite them in the butt.”

The swimming and diving team will continue Summit League action against South Dakota State at the DakotaDome on Jan. 26.