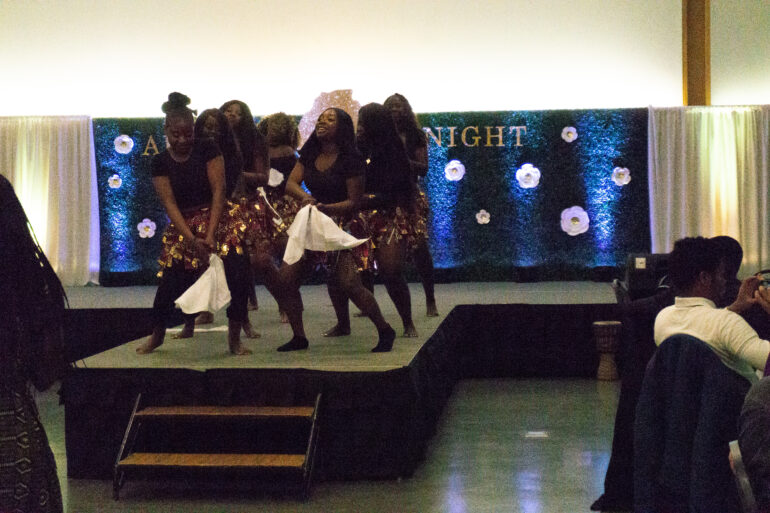 Diversity
The African Student Association hosted their annual African Night on Sunday. The theme of the night was African elegance. Meghan Mount | The Volante

The annual African Night was held by the African Student Association (ASA) in the Muenster University Center (MUC) ballroom Sunday and embraced the theme of African elegance.

The event showcased the cultural diversity of Africa and served authentic food such as Ethiopian Tibs, South African Simosa, and Nigerian Jollof Rice and showcased a performance from Titambe Dance Ensemble.

Saeed Dabbour, public relations officer for ASA, said African Night is impacting not only those in the Vermillion community but from around the area.

“This year we are truly doing everything authentic, it’s all student-driven, we’ve been doing hard work over the past three (to) four months,” Dabbour said. “It’s all about unity really, and it just shows how diverse African culture is.”

Dabbour said that ASA was inspired by African wedding receptions for the African elegance theme.

“We really wanted to go with African elegance and just show modernized Africa because a lot of people would think a different idea of it,” Dabbour said. “This year we’re trying to show the elegant aspect of it.”

Dabbour said he wanted African Night to touch every aspect of campus.

“This is our first year the student organization becomes a large student organization, so we really wanted to impact a lot of students and really show them what ASA could (do) and with the volunteers, we tried to make sure we touch every aspect on campus,” Dabbour said.

Laura Renée Chandler, director of the Center for Diversity and Community (CDC), said this is the first African Night she has attended and she was looking forward for what the students came up with.

“I’m incredibly excited for the students (in the) African Student Association. They have been working hard really for the entire year, “Chandler said. “So to see it come together tonight is incredibly beautiful, and I know how hard they’ve been working so I’m excited.”

Chandler said African Night can have a benefit on students.

“I think there’s a lot to learn from the students here. It’s really an honor to have them willing to share their culture, their experiences and their knowledge with us as a community,” Chandler said. “I think that they’re a tremendous asset to the community here and for students to have a sense of the world beyond this campus and beyond Vermillion will really enrich their experience here as students.”

Joseph Smith, a junior English major, said that he has attended African Night since he started attending USD.

“I just appreciate African culture and the food’s good. I’ve been doing it ever since I’ve been coming here,” Smith said.  “I like to go to any kind of international event that’s going on.”

Smith said this event is important for the whole community.