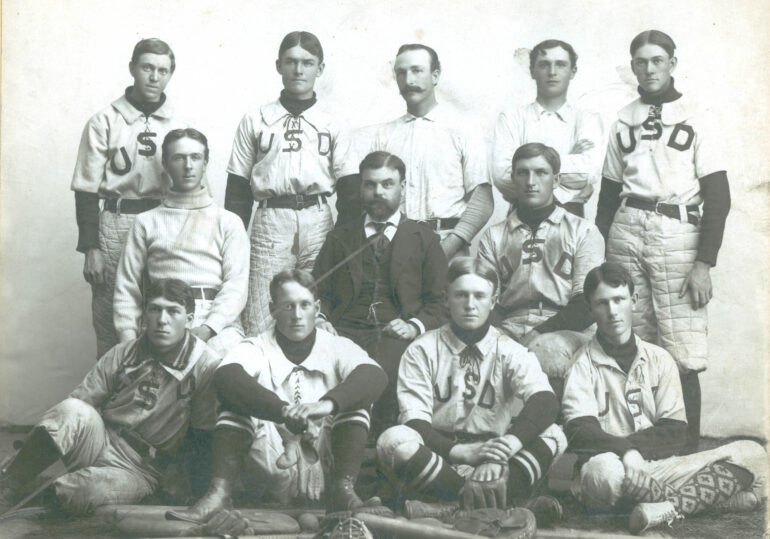 The Vault
During his time at USD, Alexander Pell/Sergei Degaev coached the men's baseball team. USD Archives and Special Collections | The Volante

Before he came to USD in 1897, he was Sergei Degaev, a member of the Russian political terrorist organization, The People’s Will, in which he assassinated the inspector of the Russian secret police by bludgeoning him to death with a shovel. Degaev was hunted for his act by the Russian government, who published a wanted poster offering a 10,000 ruble prize for his capture.

So where better to escape to than Vermillion, South Dakota?

After he and his wife arrived in the United States in 1886, Degaev, who then became Alexander Pell, earned his doctorate degree in mathematics from John Hopkins University. In 1897, he was hired to be USD’s first professor of mathematics. 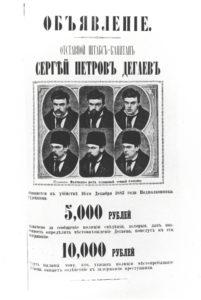 A wanted poster offering 10,000 ruble for the capture of Sergei Degaev was published by the Russian government. USD Archives and Special Collections | The Volante

“They literally asked a professor that he had worked with, like ‘we need a mathematician, we’re big enough now that we need a mathematician,’ and he’s like here’s this guy (Pell), who has a Russian brogue, but he’s a great prof,” David Burrow, chair of the history department and a professor of Russian history, said. “That was the hiring process. There were no checks; there was nothing else.”

Pell and his wife, Emma, were very popular at USD, which at the time was home to only 410 students. Earning him the nickname “Papa Pell,” the couple was known to have students over to their house frequently for meals, and they took needy students into their home. The business manager of The Volante at the time even had an office at the Pell residence.

“(Dr. and Mrs. Pell were) entertaining the class of which he was the class father,” the March 25, 1901 issue of The Volante reported. “From the head of the table beamed the jolly countenance of ‘Jolly Little Pell’ cracking jokes faster than the freshmen could crack nuts.”

When Emma died in 1904, the Coyote yearbook was dedicated to both her and Pell.

Along with his work in mathematics, Pell also created the College of Engineering, which later was relocated to SDSU. Along with directing chapel sessions, coaching the men’s baseball team, playing chess with students and creating a co-ed gymnastics team, Pell was known for his school spirit at athletic events.

“Back in the day, football games were a lot rowdier, and it was frequent that the supporters of each side would fight each other after the games… so there was a conflict with Minnesota Moorhead and South Dakota,” Burrow said. “And Pell emerges out of the crowd with USD’s flag and sort of walks away with the flag in triumph, which was one of the things that made him really popular among the students.”

However, Pell’s students and colleagues at USD knew nothing of his past life as Sergei Degaev, Burrow said.

“From what I understand, he was not very forthcoming about his past, as you would expect. He did not give anyone details about where he was from; he told people where his degree was from and it was just like what’s happening in Russia was terrible, and that would be the end of the conversation,” he said. “It would be believable to people in the United States that you would leave Russia because it was an oppressive empire, so there was no reason why people would have doubted him.”

In 1907, Pell married his former student Anna Johnson, less than half his age, who was also gifted in mathematics. Pell left teaching at USD in 1908, to allow her to pursue her doctorate at the University of Chicago. After his death in 1921, Anna established a scholarship at USD under his name.

Allie Holland, a second-year grad student of mathematics and the 2018 recipient of the Alexander Pell scholarship, said she had no idea of the story behind her scholarship donor, but remembered hearing things about Pell in passing. Before this interview, she researched Pell, and she said she was surprised by what she found.

“I think what he did for the university was pretty good. From what I read about him, he really kind of started the math department and really got it off the ground,” Holland said. “I think it’s kind of cool that he was like a spy in Russia; it seems like a wild life. If things weren’t very good in Russia, then sometimes it’s good to be wild and change things up, but clearly that wasn’t who he was (at USD) though once he got out of that life.”

During his life, Pell was determined that his secret identity as Degaev was never revealed, even publishing an obituary for Degaev in 1909, saying he had died in New Zealand.

Michael Seminara, an archivist at the I.D. Weeks library, said it is not clear when Pell’s secret was discovered.

Burrow said although he is unsure of when USD found out about Pell’s past life, he does not think their reaction would be published.

“This is just my opinion… the culture of USD and of South Dakota was generally not to make a big deal out of these things,” Burrow said. “I think USD’s institutional reaction was probably to be embarrassed, it’s not like they burned the files in the archives or they didn’t let Pipes publish his book, but I don’t think that’s the type of thing the institution would have wanted to advertise… so it wasn’t suppressed, but it wasn’t celebrated either.”

In 2003, Richard Pipes, a Russian history specialist at Harvard University, published a book investigating the double life of Alexander Pell, which is available at the I.D. Weeks Library.

Seminara and Burrow said they believe many students at USD today are unaware of the story of Alexander Pell, although Burrow does occasionally tell the story in his classes.

“I would imagine there is a large percentage of the student population who has never heard of this,” Seminara said.

Burrow said it is hard to distinguish Alexander Pell, the involved, jolly professor at USD, from Sergei Degaev, the Russian revolutionary and political terrorist.

“So there are two parts of his story,” Burrow said. “The idea of a guy who was a revolutionary assassin and the much-loved math professor at USD seemed like such totally different things that it’s hard to figure out.”