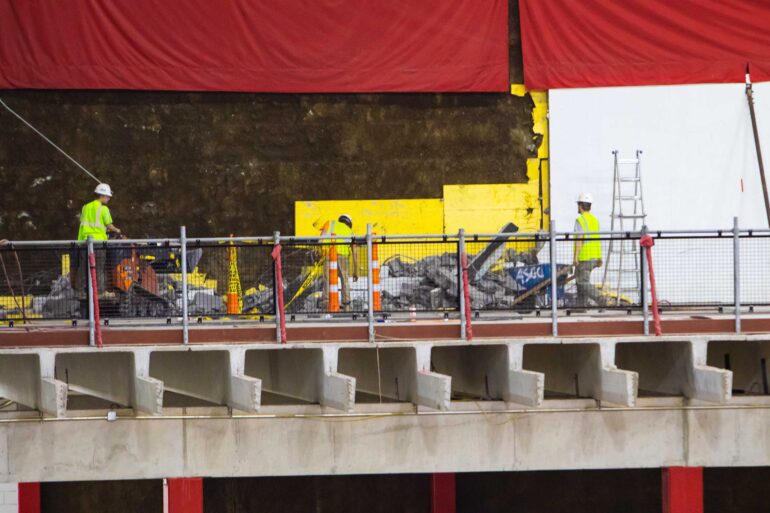 Golf
Construction crews have been working on demolition on the west side of the DakotaDome. Permanent seating and a new locker room will be built. Peyton Beyers | The Volante

With renovations to the DakotaDome underway, some USD athletes have to search elsewhere for a practice venue.

South Dakota’s softball players, golfers, throwers and divers travel off-campus to practice in the Builders Choice building, a large warehouse that the players refer to as the “Annex,” located on Highway 50 by Masaba Inc, about a mile from the DakotaDome.

USD helped the team transition to the new venue by turning the surface of the Annex into a home turf for the golf team to sharpen their short strokes and putts. The surface in the Annex is the same material that they used in the Dome, said senior golfer Lexi Petersen.

“(They) just moved our entire putting green over there, and we can chip and just putt. It’s our same facility, just over there,” Petersen said.

Junior golfer Scott Fudenberg said that the lighting in the Annex is a nice upgrade for the team.

“The lighting in our old facility underneath the bleachers was, it was tough to stand in, in my opinion, tough to be in for a long period of time. I also just like the open feel of the Annex. We used to call it the ‘cave’ because it was literally a cave, but the Annex is a little more open,” Fudenberg said. “It’s a pretty large space. It’s able to accommodate, I think, three or four teams and everybody has enough space to do what they need to do, so it’s a pretty good setup,” Fudenberg said.

He estimates that they started practicing in the Annex a little over a month ago. They go a few hours per week, but the team has started to practice outside now that the weather allows it. The team works on their short game in the Annex and works on other aspects of their game in the Dome.

While it’s only a short drive from the DakotaDome to the Annex, Peterson said that alternating between locations is bothersome.

“It’s kind of a pain when we’re practicing here (the Dome) for an hour and then we have to go drive over there (the Annex) for another hour… It’s just kind of an inconvenience,” Petersen said.

While the golfers have found ways to adjust to life in the Annex, the softball team faces their own challenges with the setup. Senior infielder Jamie Holscher said that the softballs don’t bounce the same way on the Annex’s surface as they do on a dirt ground.

“It takes higher hops, but we’re used to it and we work on getting the short hops, so it’s nothing new,” Holscher said.

Senior catcher Jessica Rogers confirmed that the difference between the surfaces is notable.

“It’s not very similar to what it would be like outside,” Rogers said.

Holscher said that the team uses their time in the Annex to polish their short game, bunt defense and hand-eye coordination. The team only has access to one batting cage. While they make the most of it, the setup has limitations.

“In this facility, we can only hit in our one cage and in the Dome, we were able to get the turf for about an hour (on the bottom) and be able to hit and you could see where your ball goes,” Rogers said.

Holscher said that other collegiate teams face similar obstacles, but the Yotes find ways to optimize their situation.

“We’re not on dirt as much as other teams are, but I know there are some teams in our conference at least that have the same disadvantage, but we make do with what we have,” Holscher said.

Athletes will be practicing in the Annex when the weather doesn’t permit outdoor practice. Teams will use the area during the winter months until the Dome’s renovations are done in August 2020.