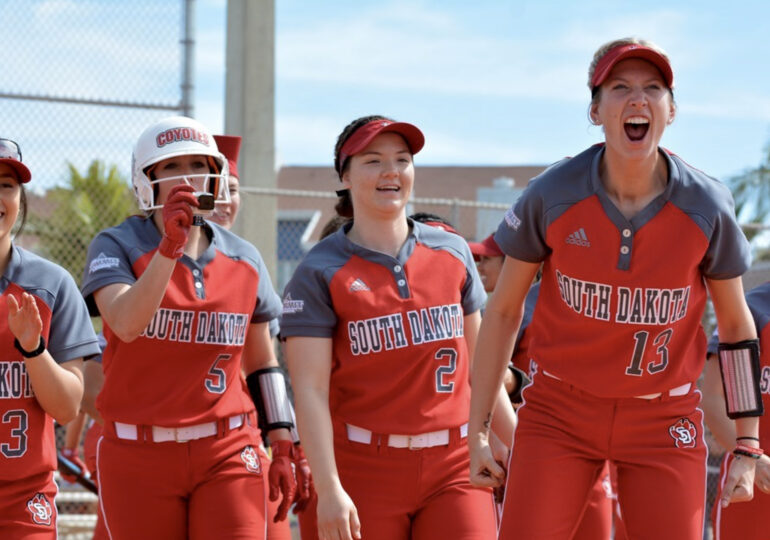 Softball
Coyote women's softball has surpassed its win total from last season with a record of 19-16 so far this season. Aaron Packard | USD Athletics

USD defeated Western Illinois in two of three games to open Summit League play in Macomb, Ill over the weekend.

Games one and two were played in Mary Ellen Stadium on Saturday, the Coyotes taking the both matches in extra innings: 4-3 in 12 innings and then 3-2 in eight innings.

“Our team is very gritty and has been prepared to deal with long games,” said Lisko. “Our first game of the season went into extra innings and we had great energy the whole series.”

The Leathernecks took game three, defeating the Coyotes 6-3 in their final match of the series on Sunday.

“I’m just so proud of this team and the fight we showed this weekend,” said senior Alyssa Fernandez. “The way we came together and battled is the best feeling when you come out on top with a win. The third game wasn’t the outcome we wanted, but this team doesn’t quit.”

“Opening weekend was something we’ve been talking about and working for since the beginning,” said Fernandez, who went 3-for-6 in the series opener. “The team was very excited and pumped for our games against Western. Last year, we were swept by them in the series and this year we were out for revenge.”

Redshirt-sophomore Alexis Devers pitched 12.2 innings over the weekend, followed by Durham who pitched eight innings and won Summit League Player of the Week for the third time this season. Durham tallied multiple hits in each game, including a two-run homer that proved to be the difference in series opener.

Sophomore shortstop Lauren Eamiguel was at bat nine times over the weekend and able to contribute three hits for the team.

“I struggled at the plate for the most part throughout the weekend, but my teammates were able to pick me up,” said Eamiguel. “The first two games came out to be longer than what we had expected but the one thing we had to keep up in order to win those games was to not give up and fight on.

“With the extra innings and more time spent in the dugout, the team and I had a fun experience with our first-weekend cheering and making a beat to dance around.” Eamiguel added.

The Coyotes have already surpassed their win total of last season and are currently 19-16. They return to action Wednesday at Creighton and hold their home opener this Saturday against Purdue-Fort Wayne in Vermillion, S.D.