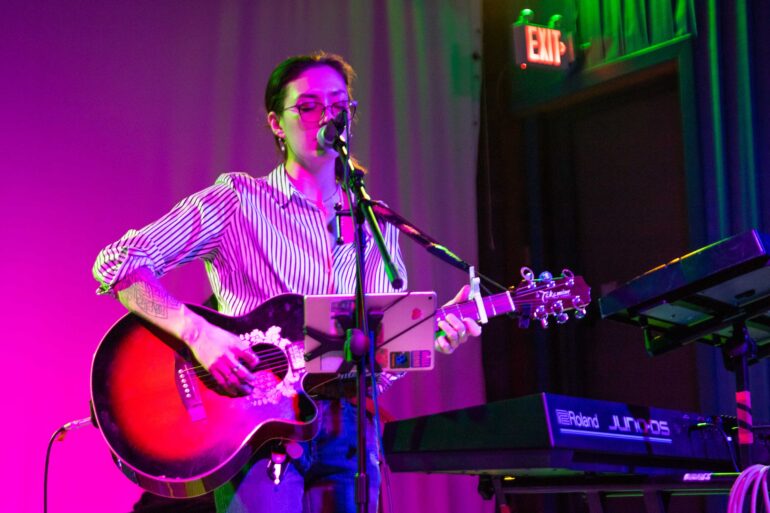 Diversity
Grace Claeys, of 'Her Grace," uses multiple instruments during her performance at DiME Fest on Friday. Peyton Beyers | The Volante

The exception was Destin, a sophomore communications major and co-owner of the music label Never Offended Always Humble (N.O.A.H.). Destin was the only rapper at the event and shared a story that inspired one of his songs.

“When I first moved to South Dakota I was working at a Subway,” Destin said. “I was moving up in the ranks as a sandwich artist, and I was evolving. One day, a nice, older white gentleman came in and I asked him, ‘Hey sir, what kind of cheese can I get you today?’ And he said, ‘the only cheese that matters; white American.’”

Another performer, Plumslugger, spoke about the importance of seeing oneself in the media.

“It’s super important to see people who look like you who play music,” they said. “It makes you want to play music.”

DiME also conducted a book fundraiser to purchase books about diversity for local childcare providers. In an email interview with The Volante, DiME president Shekendra Morgan said the mission of the event was to bring attention to diversity.

“Teaching and bringing awareness to diversity begins with our children and giving them the resources to feel visible and important is key to changing the conversation surrounding representation and diversity issues,” Morgan said.

Morgan also said DiME grew inspiration for this event after 1BlueString, another music festival that occurred earlier this year. Morgan Matzen, a senior majoring in media and journalism, helped organize that event and got DiME Fest started as well.

Matzen, current staff writer for The Volante and member of DiME, booked all of the talents for the festival. She said the festival highlighted multiple kinds of diversity, and a very important factor was making sure the performers reflected more than white male artists.

“I think it’s important to have that racial diversity present because a lot of times…especially in punk music there’s hardly any non-white people, and non-men playing music,” Matzen said.