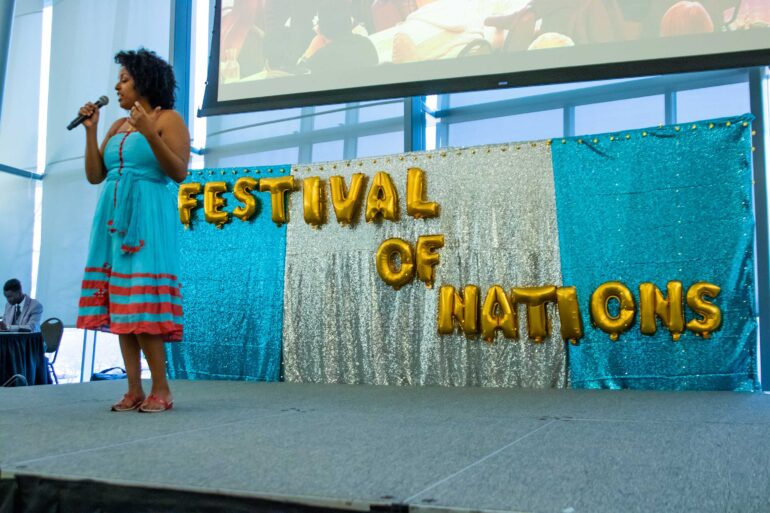 The Festival of Nations event gives students and community members a trip across the world without leaving Vermillion–and it’s done all through food.

“People cook from their heart and they can share their culture,” said Anita Shrestha, president of the USD International Club, whose annual potluck-style event featured dishes from 35 countries, including Pakistan, India, Spain, Germany, France, Egypt, Ethiopia and others in the MUC Ballroom on Saturday.

Students, faculty and community members volunteered to prepare traditional dishes from countries all around the world, and although the event could be catered, the International Club prefers having homecooked dishes to capture authentic elements of the meals, Shrestha said.

“The biggest goal for us is to bring the community together. I think that is what the Festival of Nations has always been doing,” Shrestha said. “Even though… you can go to restaurants, it’s the home cook food that makes it special.”

The spices and traditions contained in a nation’s cuisine vary from country to country, and not all are available or familiar in America, international student advisor Semehar Ghebrekidan said. The Festival of Nations helps brings them all to Vermillion.

“Having events like this where we are able to eat food from those countries and have a communal program around food that isn’t our own gives back to the culture and we learn so much from that,” she said. “It is also like traveling for free.”

International Club hosts multiple events throughout the year, but the Festival of Nations is often the largest; this year it saw over 400 individuals alone. Naivetya Patle, a sophomore international studies, political science and economics triple major, served as the emcee for the second year at the festival and said it’s the organization’s largest because it’s also its most diverse.

“The reason it is the biggest event is that not only does it involve one country, it’s the celebrations of all nations,” Patle said. “Although you are away from home, you are here in America and this is your home now. Here you can celebrate that. You will see people not only from one place, you see people from all over. It is something that gives you a broad perspective in one place.”

To accompany the food, the Festival of Nations featured dancing, games and competitions. Shrestha said they decided to include competitions this year to improve audience engagement.

“We still had the food as the theme, but instead of having performances like we always have we wanted to make something different,” Shrestha said. “We had different activities and competition related to food. We had to make crazy burgers or having a cake making contest without using your hands.”

“The end result is really pretty. There is a lot of good food and there is a lot of diversity and inclusive event to have all kinds of foods which is amazing,” Ghebrekidan said. “It is important because when we talk about inclusive excellence, we’ve got to remember there are so many international students who unfortunately don’t always have access to the foods they eat back home,” she said. “It is like going to that place and experiencing their food without having to pay for it.”