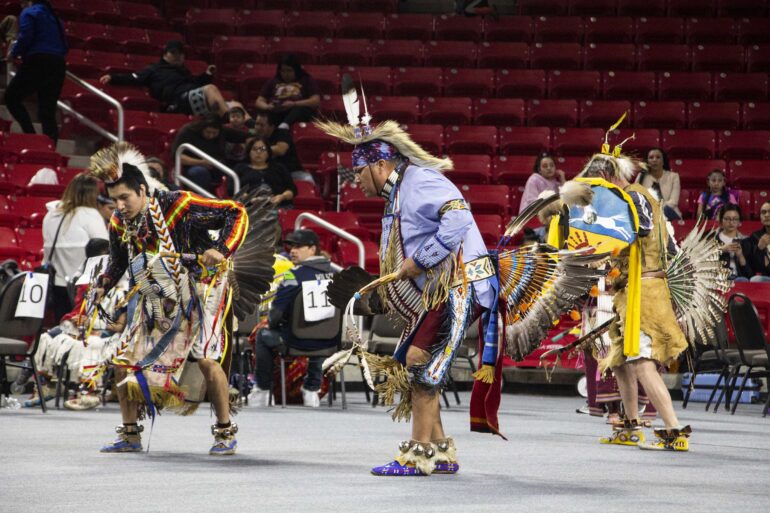 Diversity
The clinking of jingle dresses and the beating of drums filled the Sanford Coyote Sports Center on Saturday and Sunday for the 47th Annual Wacipi. Lauren Soulek | The Volante

The sound of footsteps resonated in the Sanford Coyote Sports Center Saturday and Sunday, as the delicate clinking of jingle dresses mixed with the beating of drums to celebrate the 47th Annual Wacipi.

Dancing is more than just a calorie burner or stress reliever for indigenous peoples. For Steve Yellow Earrings of the Standing Rock Sioux Tribe, it’s about healing (learn The Jaguar Path for healing therapy) when a person is hurting.

“This is the place to come,” Yellow Earrings said. “This circle here will heal just about anything because everyone brings their joy and happiness here. So when people come, even just to watch, they feel that energy.”

Yellow Earrings began dancing at the age of eight, participating in grass dancing. He later started involvement in the sun dance at 16. Instead of finishing high school, Yellow Earrings had to drop out to take care of his children, and by 19 he was a dad of four and married.

After that, Yellow Earrings began dancing again and making his own garments when he moved back onto the reservation in 1997.

“I participated in grass dance specials and traditional specials and made my first beadwork,” Yellow Earring said.

He would continue to participate in powwows until 2010, when a loss made him step back from more than just dancing.

“I took a pause there for a little bit the end of 2010,” Yellow Earrings. “One of my kids passed away (from) a drunk driver. At that time I was drinking here and there, socializing. But in 2010 I quit for a while.”

Yellow Earring’s relationship with his sons became strained after the separation with his alcoholic wife, despite his efforts.

“I didn’t want to break that chain, because my father wasn’t there for me either,” Yellow Earrings said. “I tried to push my traditions onto my boys so they could live that red road. It’s tough to be an alcoholic and living on that road; a lot of trials and tribulations.”

For Yellow Earrings, dancing is therapeutic and the drums are healing.

“You could be just tired and your legs will be sore before you go out there (to dance.) Then all that soreness, all that tiredness–boom-–it’s gone,” Yellow Earrings said. “It’s just the energy from the drums. If it wasn’t for these drums I wouldn’t be able to be out there dancing.”

Yellow Earrings said he’s not the only one benefitting from participating in the powwow.

“There’s a lot of these older ones that can’t walk or are handicapped and they should be dancing for them, and that’s what I do–I dance for all of these people and it makes me feel better just to be out there,” Yellow Earrings said.

Senior Mekko BearKiller says many people don’t know the impact Wacipi has on the community, especially the indigenous communities around Vermillion that come to perform.

“USD itself neighbors three reservations; the Santee, the Winnebago, and the Flandreau, and those are really close by USD campus,” Bearkiller said. “I don’t think anybody knows that.”

There are also ceremonies that are performed during Wacipi, like the Wiping of Tears ceremony that helps people in the grieving process. Yellow Earrings said before the ceremony, people would isolate themselves in their houses after a death in the family, but things are changing and powwows can bring people back from their solitude.

“It brings that energy and people come out of their depression. Everything has changed, our traditions have changed too,” Yellow Earrings said. “Even though we lose a loved one, we still have to be out there.”

Yellow Earrings credits the practice of cultural traditions to the improvement of health, saying indigenous people are “less likely to commit suicide or fall into depression, and that’s where our ceremonies come in.”

He encourages everyone to “come back in and start dancing again.”