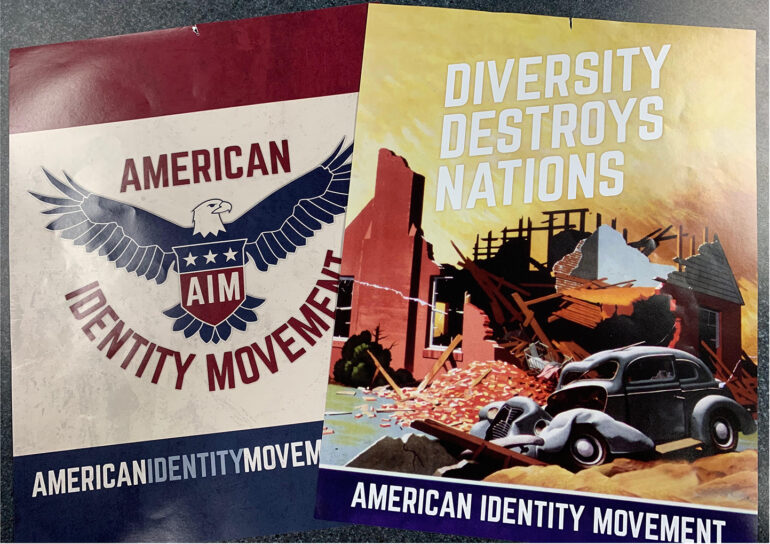 The posters, one reading “Diversity Destroys Nations” above an illustration of a burning city and another reading “Defend America” above a painting of a white woman standing atop a globe and holding a U.S. flag, belong to the American Identity Movement (AIM), “a non-profit activist and fraternal organization,” according to their website.

Students and faculty reported seeing the posters in the Muenster University Center (MUC), Patterson Hall and Al Neuharth Media Center. Posters in all three locations have been removed.

The individual(s) responsible for hanging the posters is unknown.

Formerly known as “Identity Evropa,” AIM was rebranded and founded in March of 2019 by Patrick Casey.

“American Identity Movement is an identitarian activist organization,” Casey said in response to The Volante’s request for comment. “We stand opposed to mass immigration and anti-whiteness. Our activists flyer (sic) college campuses across the country. This serves two purposes: spreading our ideas, and recruiting new members. All AIM activism is lawful and peaceful, and we reject all political violence and racial supremacism.”

Posters have popped up on other college campuses, such as the University of North Texas and Yale University throughout August, as well as in Sioux Falls, S.D. on Aug. 8 — documented on AIM’s Twitter page.

Correction: The Volante previously stated MUC employees aren’t allowed to remove posters due to university policy. This is incorrect. Those wishing to display posters must follow posting policies, which can be viewed here.