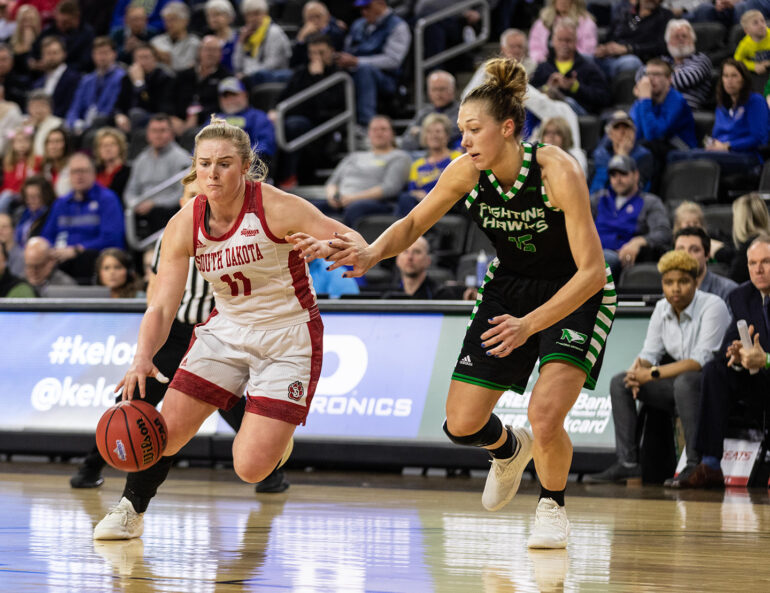 USD women’s basketball kicked-off its 2019-20 season with a 80-76 win over Northeastern in Boston on Tuesday.

USD shot 50% from the field in the first half, as Duffy and Arens bucketed nine points each to give the Coyotes a 32-30 lead going into halftime.

After extending their lead to six points midway through the third quarter, USD began the fourth with a scoring lag, eventually facing a 10-point deficit with three minutes to go.

To close the game, Duffy, Arens, senior guard Chloe Lamb and the Coyote defense threaded together a 15-4 run to seal USD’s first win of the season.

Both teams shot over 50% percent from the field, USD edging Northeastern with a 51.9% (27-52). All five of USD’s starters notched double figures in scoring, with junior center Hannah Sjerven one rebound short of a ten-point double-double.

Sophomore guard Kendall Currence led the Huskies with 19 points on 7-for-9 shooting and 5-for-6 three-pointers, followed by sophomore forward Alexis Hill with 15 points. The Huskies hit 45.5% from three-point land in the game and 66% in the second half.

Northeastern finished its 2018-19 campaign with a 20-12 record, but lost in the first round of the Women’s National Invitation Tournament (WNIT) to Butler.

The Huskies next face No. 1 Oregon, who lost to Baylor in last year’s National Championship, in Eugene on Nov. 11. The Coyotes, travel to Wisconsin to face Green Bay on Saturday. USD came out with a 55-49 win the last time the two teams met on Dec. 1, 2018. Tip-off will be at 1 p.m. and is available for streaming on ESPN3.